India   All India  26 Sep 2018  Text messaging: In search for a meaningful communication
India, All India

Text messaging: In search for a meaningful communication

This texting language has grown into such a separate communicative medium that there is an entire Wikipedia page dedicated to it. 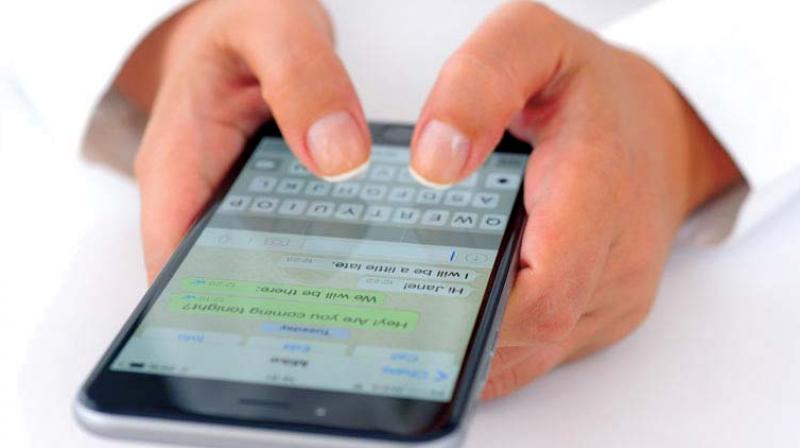 While texting has become an efficient and immediate way to communicate with many individuals, it has also removed the many complexities and nuances of languages.

Texting has definitely affected the state of grammar to a greater extent. The ubiquity of texting is so great that almost everyone text regularly as their main method of communication. We as humans are a product of our environment, circumstances and with whom we interact with regularly. The ability to speak and write with proper grammar not only allows for clear and precise communication, but a lack of proper grammar is indicative of poorer comprehension, and it unfortunately diminishes the speaker’s credibility. Yet despite this longstanding dependence on grammar in our daily communication, a new communication medium has emerged in the last decade which has generated unprecedented flexibility in our use of grammar, almost to the point of making communication unintelligible to non-texting audiences.

Texting has become such a norm in society today because of the increase in technology over the past few decades and has become a part of everyday life for most people. Generally, people keep up with their friends on some sort of messaging app, whether it is texting, Facebook messenger, or other social media apps. As I write this, I receive many incoming messages and see a pointed difference in how I write this article versus how I respond to those text messages. When texting, I make conscious efforts to shorten my messages either through shortening of words or improper grammar. For example, I will use “cuz” instead of because, “u”, instead of you, or “idk”, instead of I don’t know. This continual use of these misspellings of words has led me to sometimes confuse my texting language from my “proper” language. When sometimes writing articles, I catch myself using “u” instead of you or “cuz” instead of because.

More than just misspellings, I have also noticed that texting also prompts people to shorten their messages in general. If ever someone were to send a nicely articulated yet long text, people judge the text, saying things like, “Why is that person writing you an essay over text?” In the texting world, long messages are not acceptable ways to communicate. Instead, texting requires the shortening of messages to get to the gist of something, leaving out nuances or subtleties that could add to that message. In addition, formal language through text is also not considered acceptable. The more shortenings or misspellings there are the more casual and acceptable the message is. Many filler words such as, “like”, or “um”, are often found in text messages, including my own.

This texting language has grown into such a separate communicative medium that there is an entire Wikipedia page dedicated to it. One of the common changes to regular language brought about by texting is the pervasive use of word and phrase abbreviations. Examples include, CU for “see you”, NP for “no problem”, etc. All of these abbreviations take the first letter of each of each word in the phrase. However, some abbreviations can be more complicated and require a greater level of familiarity with the usage. An example of this less formulaic abbreviation is, xoxo for “hugs and kisses”. But the change of grammar is not as simple as using new abbreviations. For an example of this, we must look no further than perhaps the most commonly used texting abbreviation, “LOL”. This translates directly to “laughing out loud”, but this it not the way it is actually used. The phrase “LOL” is mostly used at the beginning or end of a text to indicate friendliness, and add warmth to a message. It is well understood in the texting community that the expression to laugh out loud does not translate directly to physical laughter.

While texting has become an efficient and immediate way to communicate with many individuals, it has also removed the many complexities and nuances of languages. Because messages are so direct, the importance of how things are articulated is not as appreciated anymore. Implied messages or analysing of text is not a skill people use regularly anymore because of the need for texts to be direct and straightforward. As a result, I believe many people of this generation lack the skills to be as analytical in regards to language. I also believe that when writing formal essays or papers, people of this generation tend to find it harder to use more formal language. Basic grammar rules are often overlooked or misused because of the blatant disregard for grammar when texting. For example, the number of people that would say, “She’s a girl that has a white dress,” versus the correct, “She’s a girl who has a white dress,” shows how small grammar rules like this one are cast to the side as a result of people not using them in their daily conversations.

While this is my opinion on the matter, studies have shown that texting does not necessarily affect people’s grammar performances. One article explained that as long as people can differentiate between the two language spheres, grammar should not be affected. While I can agree with this statement, I still think that analytical skills when relating to language are not as strong as they may have been in the past because of the directness of the messaging culture. However, according to this study, grammar and spelling seem to not be affected greatly or at all by the texting culture.

Despite all these changes, it can be argued that texting is merely an evolution of grammar. Since all languages constantly evolve both in their vocabulary and usage, it stands to reason that grammar can evolve as well. However, this may lead to conflicts with the teaching of grammar as a right platform in right manner.

M.J. Warsi is a well-known linguist, author and columnist. He may be reached at warsimj@gmail.com