Tomy will possibly be taken to Mauritius when naval vessel INS Satpura reaches him Thursday. 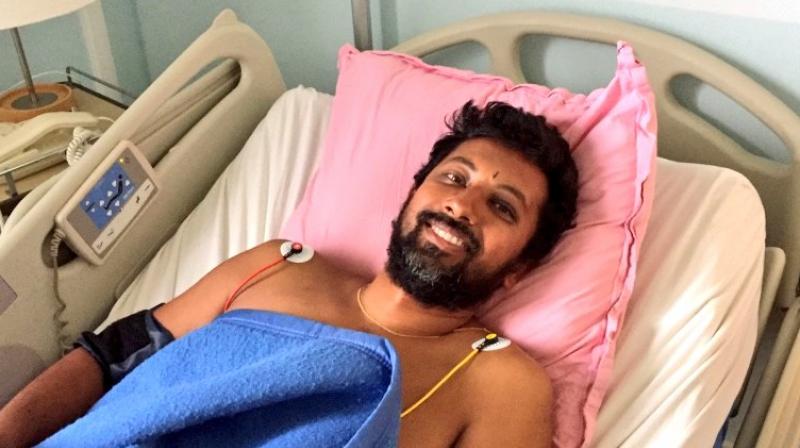 Tomy's non-motorised sailing yacht was damaged in a storm Friday while competing in the Golden Globe Race. (Photo: ANI/Twitter)

Kochi/Mumbai: Commander Abhilash Tomy, undergoing treatment in a remote Indian Ocean island after being rescued mid-sea, Wednesday said he survived the storm-hit ocean because of his sailing skills and Naval training.

Thanking all those responsible for saving him, the Naval officer said the sea where his non-motorised yacht was damaged in a storm Friday while competing in the Golden Globe Race was very rough.

"The sea was unbelievably rough. I and my boat Thuriya were pitched against nature's might. I survived because of my sailing skills, the soldier bit in me and my Naval training cut-in for that fight," said Commander Abhilash Tomy.

"Very thankful to #IndianNavy & all who rescued me", Tomy was quoted as saying in the Indian Navy spokesman's tweet.

Tomy will possibly be taken to Mauritius when naval vessel INS Satpura reaches him Thursday.

A defence official said in Mumbai that the vessel was expected to reach Ile Amsterdam, a French territory, Thursday and the Indian crew would meet Tomy, a Kirti Chakra awardee.

The 39-year-old sailor had reached there Tuesday after being rescued by a French vessel, the official said.

His non-motorised sailing yacht was damaged in a storm Friday while competing in the Golden Globe Race.

A Navy official said Wednesday that their priority was to shift Tomy to Mauritius, where the Indian Navy has a physical presence.

"He will be taken to a hospital, and if permitted, he would be flown back to India," he said.

A defence spokesman said Tomy suffered some "blunt injuries", but there was no sign of permanent damage to any body part.

"The decision on shifting him back to India will be taken only after his thorough medical check-up at Mauritius," he said.

Vice Admiral Ajit Kumar P, the vice chief of Naval staff, spoke to Tomy. "He is doing fine and recovering fast under medical supervision. His medical reports are also fine," he said.

Navy spokesperson D K Sharma said the options were open on making arrangements to shift him to India.

Tomy's mentor and race manager Commander (Retd) Dilip Donde had said earlier the sailor was stable and in safe hands at the tiny island, which had sound medical facilities.

The island does not have an airstrip and Tomy would have to be taken by the sea route itself to either Mauritius, the Reunion Island or Australia, he had said.

Tomy was drifting for nearly three days in his 32-feet long yacht, Thuriya, which was damaged in a storm.

Vessels and naval assets in the vicinity were deployed for his rescue. Tomy texted through a satellite-based device, requesting for evacuation, stating that his back was injured and he was unable to move.

He was participating in the Golden Globe Race, where 11 participants are using 1968 vintage boats and technology to circumnavigate solo and non-stop.

The race is being held to celebrate the golden anniversary of the first such solo circumnavigation in 1968.

Videos and pictures of Tomy's evacuation by the crew of Osiris were released by the Indian Navy and the Australian authorities, whose reconnaissance aircraft were in the skies whilst the rescue happened.

The pictures show Tomy being pulled out on a stretcher from the cabin of Thuriya and then carefully lowered into a small raft which had come to fetch him from the Osiris located nearby.

Tomy was placed third in the race when he faced the storm.