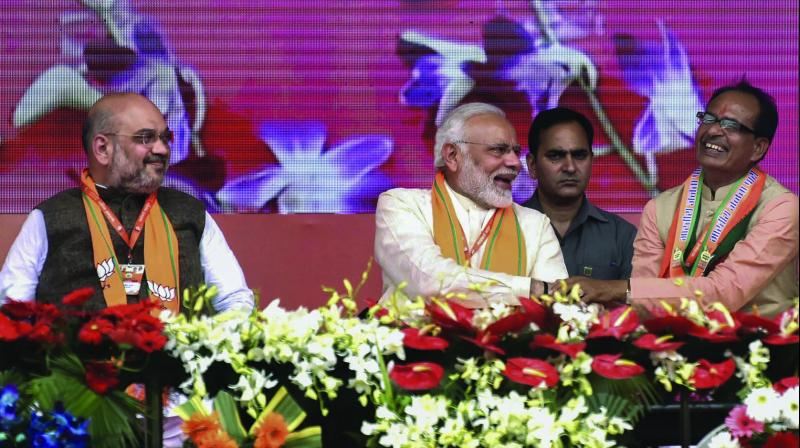 Bhopal: Challenging the Congress to a debate on development issues, Prime Minister Narendra Modi on Tuesday launched the BJP’s poll campaign in Madhya Pradesh by attacking the Opposition party for its baseless mud-slinging and its inability to stitch together alliances in the country where, he said with pride, the BJP is in power in 19 states.

In an apparent reference to Congress, allegations on the Rafale fighter jet deal, Mr Modi said that the Opposition party, instead of indulging in mud-slinging, should engage in a debate on issues like development, but “they do not dare to”.

Flanked by BJP chief Amit Shah and chief minister Shivraj Singh Chouhan at a rally in Bhopal, Mr Modi said, “They (Congress) are indulging in mud-slinging because they find it easier... They have indulged in mud-slinging earlier too. But I want to tell them, the more you throw mud at us, the more the lotus (BJP’s symbol) will bloom.”

The BJP government is seeking a re-election for a fourth term in Madhya Pradesh in the year-end Assembly polls.

Mr Modi hit out at the Congress for attempts to tarnish his image.  “There is no abuse in dictionary that has not been used for me (by the Congress). All your efforts to make the mud thrown at me to stick will never succeed since people will never believe you,” he said.

The Prime Minister also accused the Congress of looking for support outside the country, in a veiled reference to Pakistan whose former minister recently tweeted in favour of Rahul Gandhi.

Without naming Pakistan, Mr Modi hinted that the Congress has failed to forge an alliance in the country and is, therefore, forming alliances with other countries.

“How pitiable the condition the Congress is now! The 125-year-old party is now seen begging with small parties for alliance,” the Prime Minister said.

He said that the Congress has been reduced from 440 seats in the Lok Sabha to 44 seats due its “arrogance” but it is still not ready to introspect or correct itself.

“The Congress found a scapegoat in EVMs after the party faced debacle in 2014 parliamentary polls. But, the BJP did lot of introspection after it lost in 1984 leading to its revival,” he added.

He also came down heavily on the vote bank politics being pursued by the Congress and warned that such politics was eating out the country like termites.

“These are the people who used a section of society to win elections, never caring to work for the welfare of others but only trying to save their chair. This sin of dividing the country is a major reason of its destruction,” Mr Modi said, in a veiled attack on the Congress.

Looking to strike a cord with middleclass and poor voters, Mr Modi reminded them of his humble background and said that the Congress is “unable to accept that a ‘chai wala’ (tea vendor) or the son of a poor mother like (MP chief minister) Shivraj Singh Chouhan and (Uttar Pradesh chief minister) Yogi (Adityanath) could attain the chair of power”.

Mr Shah joined Mr Modi in slamming the Congress, saying that Rahul Gandhi is daydreaming about winning the election in state.

He attacked the Opposition over the National Register of Citizens (NRC) issue and said that they are raising insignificant issues to deflect attention from crucial subjects, and that “there is no competition to the BJP in respect of development, security and nationalism”.

Mr Shah asserted that the process of evicting “illegal infiltrators” from the country will not stop. Notably, the draft NRC recently published in Assam had identified nearly 40 lakh illegal immigrants.