India   All India  26 Sep 2018  Around 300 rescued from Himachal's Lahaul, Spiti after heavy snowfall
India, All India

Around 300 rescued from Himachal's Lahaul, Spiti after heavy snowfall

Official of the State Disaster Management Authority said most of the 600 roads, including the Chandigarh-Manali road, have been reopened. 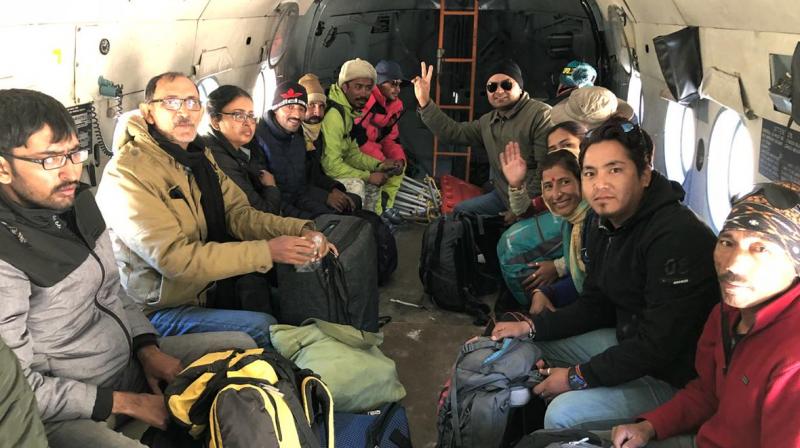 Apart from the one's rescued, around 200 people are still stranded in areas of Lahaul and Spiti. (Photo: ANI/Twitter)

Shimla: Around 300 people stranded in various parts of Himachal Pradesh's Lahaul and Spiti district have been rescued and most of the 600 roads of the state reopened after being blocked following recent snowfall, officials said Wednesday.

Twenty-seven stranded people, including nine foreigners, were airlifted to safer places by the Indian Air Force, while the Border Road Organisation (BRO) rescued many people, the officials said.

An official of the Himachal Pradesh State Disaster Management Authority said most of the 600 roads, including the Chandigarh-Manali road, of the state have been reopened.

He also said about 300 people stranded at various places of Lahaul and Spiti district have been rescued. Around 200 people are still stranded there, the official added.

Keylog Sub Divisional Magistrate Amar Negi said eight persons, hailing from West Bengal, were airlifted to safer places in Stingri in Lahaul district and Bhuntar in Kullu district on Wednesday by 11 am, while five were airlifted to Stingri on Tuesday evening.

Five of total 27 people airlifted have been taken to Bhuntar in adjoining Kullu district in IAF helicopters directly, he added.

The weather conditions are favourable now and BRO personnel are on their job to clear the roads of debris, he said hoping that most of the roads would be opened by Thursday morning, the SDM said.