Number of deaths in Himachal Pradesh, hit by heavy rains - and snowfall in Lahaul and Spiti - has risen to 10. 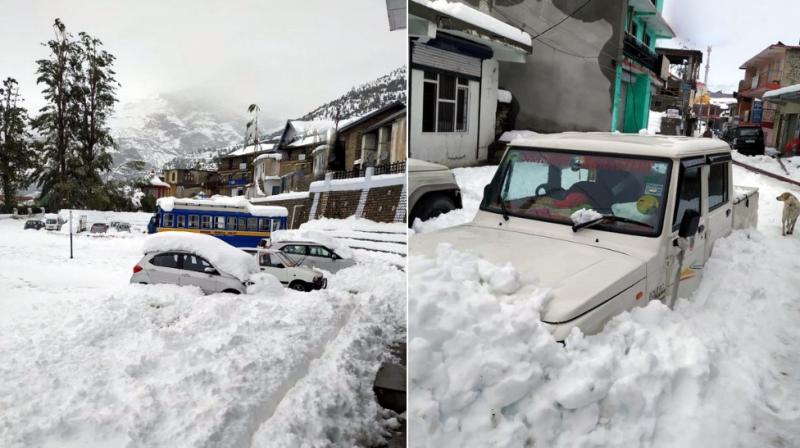 Shimla: About 50 IIT-students on a trek in Himachal Pradesh's Lahaul valley were rescued by Indian Air Force helicopters while over 500 people remain stuck in other areas in Lahaul and Spiti district, officials said Tuesday.

The number of deaths in the state, hit by heavy rains - and snowfall in Lahaul and Spiti - has risen to 10 with four more deaths being reported on Tuesday. A team of six trekkers from New Delhi and Shimla is missing in Kinnaur district, officials said. A rescue operation will be launched Wednesday.

Heavy rains had triggered flash floods and landslides in the hill states of Jammu and Kashmir, Himachal Pradesh and Haryana, killing at least 11 people on Monday. There were rains also in Punjab and Uttarakhand.

No fresh casualties were reported in the other states on Tuesday. But in Himachal Pradesh's Shimla district, two labourers were killed and four others injured when a rock fell on their home in Nerwa's Bihari Colony.

Also, two people were killed when a car skidded off a slippery road in the state's Kinnaur district.

There were only scattered showers in the state on Tuesday and the Met department predicted that the weather will hold on Wednesday as well.

But several roads, including portions of the Chandigarh-Manali route, remained blocked due to landslides and snowfall.

Apart from the rescue of the entire group of trekkers from the Indian Institute of Technology-Roorkee, the IAF also rescued a German couple trapped in a blizzard while trekking from Ringdum to Dibling near Lahaul-Spiti.

The IAF has sent three helicopters to Himachal Pradesh, and the Centre has assured more choppers if needed, the chief minister said.

They are being deployed to rescue over 500 people still stranded in Lahaul-Spiti. About 300 of them were trapped in Baralacha area and the remaining 200 in Koksar, an official said.

There are reports of others caught between landslides on the roads.

Schools were closed for the second consecutive day on Tuesday in Kangra, Kullu and Hamirpur districts, officials said.

The plan to release excess water from the Pong dam on Beas river in Kangra district was deferred till Wednesday morning, providing relief to the residents of low-lying areas in the state and neighbouring Punjab.

However, excess water from the Pandoh dam in Mandi district was released at 11 am on Tuesday, a Central Water Commission official said.

The plan to release water from the Pong dam was put off because of reduced inflow and the forecast of subdued rain in the catchment area, a Bhakra Beas Management Board (BBMB) official said.

The Lahaul-Spiti district witnessed about four feet of snowfall up to Monday. As a result Rohtang Pass and several inner roads were blocked.

The Border Roads Organisation (BRO) has cleared a 6-km stretch of Keylong-Stingri road and work is on to clear other roads of debris from landslides.

The badly damaged road from Kullu to Manali would be restored within a week, Himachal Pradesh Chief Minister Jai Ram Thakur said after an aerial survey of rain-hit areas.

Water supply in Manali would be restored within three days, he said.

Supply of water and power has also been hit in Kullu, Chamba, Lahaul-Spiti and Kinnaur districts, officials said. In Kullu, 378 transformers were damaged, affecting power supply in about 40 per cent area of the district's area.

Thakur urged the centre to release Rs 200 crore for immediate work on restoration of infrastructure.

He said the state has suffered Rs 1,230 crore in damage due to natural calamities earlier in the year.

The Himachal Pradesh government has already released Rs 230 crore to deal with damage after the recent rain.