The Army has killed five militants during a cordon-and-search operation in Uri sector launched on Sunday. 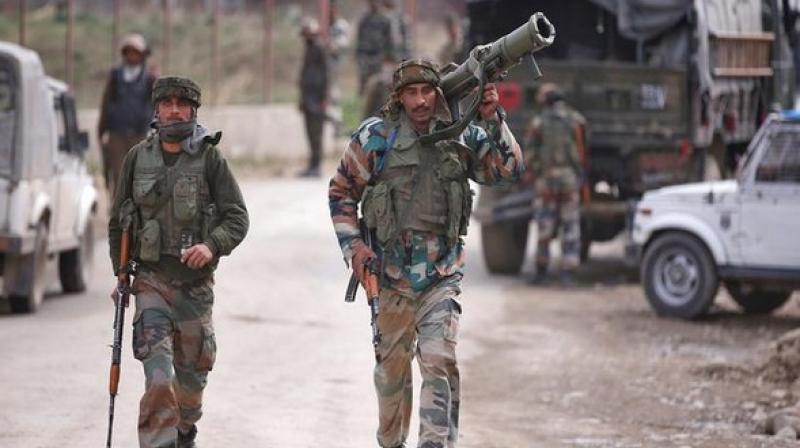 Srinagar: The Army on Tuesday said that it repulsed Pakistan Border Action Team (BAT’s) attack at one of its forward posts in Keran sector of the Line of Control (LoC) in Jammu and Kashmir’s Kupwara sector.

“Our alert jawans in a swift action repulsed the attack and forced the heavily armed BAT group to retreat and fled back to PoK even though it was provided firing cover from across the LoC. No casualties are reported,” said a defence spokesman.

He also said that the exchange of fire between the two sides, however, was underway when reports last came in.

In a separate incident, the Army troops shot dead a top commander of Hizb-ul-Mujahedin, Abdul Qayoom Najar, in a fire fight in the LoC’s Uri sector earlier during the day. The officials said that Najar who figured in the list of ‘most wanted terrorists’ was killed as Army foiled an infiltration bid along the LoC in Uri sector of Baramulla district.

“An infiltration bid was foiled in general area of Zorawar (Uri). One terrorist was killed and one weapon was found on him,” the defence spokesman Colonel Rajesh Kalia said.

The Army has killed five militants during a cordon-and-search operation in Uri sector launched on Sunday.

The Army officials while giving the details of the Keran infiltration bid said that seven to eight armed men sneaked into the Indian side of the de facto border at around 1 pm and then targeted an Indian post with automatic weapons.

“They were the members of Pakistan’s Border Action Team (BAT) but were forced to retreat,” they said.

The officials also said that the Pakistani troops fired at Indian posts in their attempt to facilitate the intrusion.

“The Pakistani troops fired mortars and also used light weapons to provide firing cover to the infiltrators,” they alleged.

The officials said that Pakistan’s Border Action teams usually comprise members of the neighbouring country’s Special Forces and militants. On June 22, the Indian troops had repulsed a similar attack by the members of Pakistan’s BAT who had allegedly intruded 600 metres deep inside the Indian territory after breaching the LoC in Poonch district.

One of the intruders was killed in the swift Indian action but a second intruder had managed to escape and return to PoK under cover fire from Pakistani troops, the officials had said.

However, soon after the incident, two Army soldiers were killed in heavy exchange of fire between the facing troops in the area.

Earlier on May 26, the Army had claimed killing two members of Pakistan’s BAT in Uri sector of the LoC. A day later, six militants were gunned down by the Indian troops in the same sector.

On May 1, two Indian soldiers were beheaded by the Pakistan Army’s BAT in a different sector of the LoC. The incident had led to parts of the 740-km long LoC witnessing escalation in tensions.

The subsequent skirmishes between the facing armies had left several civilians dead and many injured and forced the border dwellers to desert their shell-hit hamlets, mainly in Rajouri district, and relocate to safer locations.

The de facto border and also the International Border (IB) in Jammu and Kashmir have once again turned hot and active hostilities are taking place on almost daily basis.

Meanwhile, the Army, the CRPF and Jammu and Kashmir police on Tuesday launched a search operation in Hiranagar area of the IB in Kathua district following reports about the infiltration of militants from across. The security forces also used helicopters for surveillance of the area, reports said.

The reports said that some villagers of the area had noticed the presence of four suspects when they were working in the fields. They immediately informed police about the suspicious movement which with the Army and the CRPF launched the operation.