A couple in Madhya Pradesh renounced their three-year-old daughter and property worth Rs 100 crore to become a Jain monk and a sadhvi. 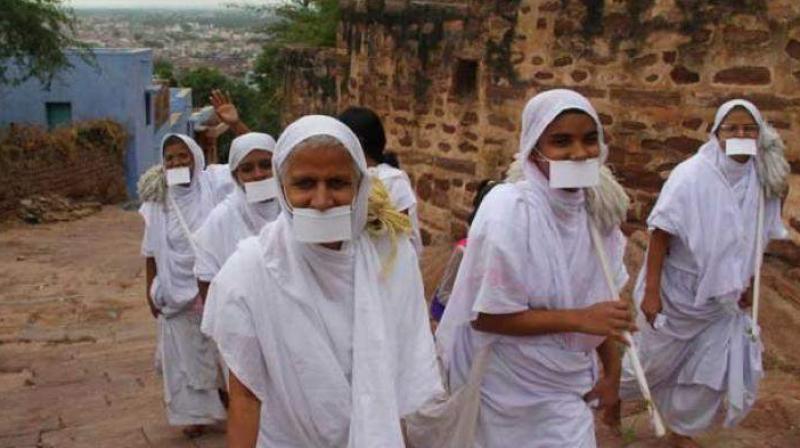 Ahmedabad: An affluent Jain couple from Madhya Pradesh has adopted monkhood after renouncing property worth an estimated Rs 100 crore and leaving their toddler daughter in the care of her grandparents, as they set out on the journey for salvation.

While Sumit Rathore (35), a businessman, was ordained in the Shwetambar (white-clad) order of Jainism at a ceremony in Surat on September 23, his wife Anamika (34) embraced monkhood on Monday after submitting an affidavit, as asked by the authorities, stating their three-year-old daughter Ibhya would remain with her maternal grandparents.

Sumit and Anamika, who hail from Neemuch in Madhya Pradesh, were granted "deeksha" by Sadhumargi Jain Acharya Ramlal Maharaj.

However, the couple's journey to monkhood was not without hiccups, especially over the future of Ibhya. A Neemuch-based activist had sought the intervention of the National Human Rights Commission (NHRC) to stop the initiation ceremony in the interest of the minor daughter of the couple.

A day before Sumit became monk, the Gujarat State Commission for Protection of Child Rights (GSCPCR) had sought a report from the civil and police administration about the steps taken by the couple to secure the future of Ibhya, who will now have no relation with her parents as monks are not allowed to keep family ties and have to sever all forms of worldly attachments.

The GSCPCR forwarded the matter to the Surat Police, who then approached the couple and their relatives to check on the steps taken by them to secure their daughter's future, Surat Police Commissioner Satish Sharma said on Tuesday.

"The matter was referred to us after someone filed a petition with the child rights panel about the guardianship of the couple's daughter. The couple submitted an affidavit that they have taken ample steps to secure her future," he said.

As per the affidavit, Ibhya will be looked after by Anamika's parents.

The police commissioner said a relative is also learnt to have expressed readiness to adopt the child. Sharma said police will submit its report to the commission (GSCPCR) soon.

Sumit had worked in London before managing his family business in Neemuch, while his engineer wife Anamika was earlier employed with a mining major.

His cousin Sandip Rathore had claimed that before deciding to adopt a life of asceticism Sumit owned property worth Rs 100 crore.

Sandip had expressed reservations over the couple's move to become monks.

However, Anamika's father Ashok Chandaliya, a former Neemuch district president of the BJP, had last week said that he would take care of his granddaughter. "I am not against my daughter Anamika becoming a nun," he had said.

Sumit and Anamika were married for four years.

Sumit had announced his decision to take the vow of monkhood at a function attended by Acharya Ramlal at Surat last month.

"However, the pontiff asked him to seek Anamika's permission. She not only gave her consent but also expressed desire to become a nun. Their families asked them to rethink, but the couple stood their ground," Sandip said.

As per the Shwetambar tradition, the monks initiated into the order shave their heads and dress in white robes for their entire life.

The monks also start wearing a mouth covering so they do not swallow any living creature even by accident while talking.