The Varanasi Commissioner said the treatment of the complaint was revealed after the preliminary investigation. 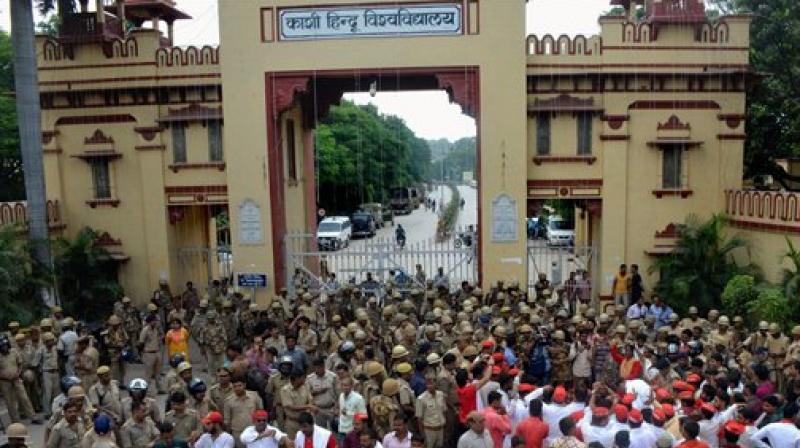 Heavy police force deployed outside the Banaras Hindu University as Samajwadi Party workers protest over the police laticharge on the female students of the university, in Varanasi. (Photo: PTI)

Varanasi: Varanasi Commissioner Nitin Gokarn on Tuesday said that the preliminary investigation has revealed that the administration of the Banaras Hindu University (BHU) did not respond sensitively to complaint of a student.

Gokarn, in his report to Chief Secretary Rajiv Kumar, said the university did not handle the situation on the campus on time. Had the administration addressed the complaint in a sensitive manner and handled the situation on time, the violence would have been avoided.

The commissioner also said that the student was molested and the protests erupted because the students were not satisfied with the way the university administration did not deal with the complaint in a sensitive manner.

Prima facie investigation has also suggested that students were lathicharged when the students tried to forcibly enter the Vice-Chancellor’s lodge on the campus.

A number of students, including women, and two journalists were injured in a lathicharge by the police in BHU where a protest on Saturday night against an alleged eve-teasing incident turned violent.

However, Vice-Chancellor Girish Chandra Tripathi has denied the allegations of lathicharge on students.

“Suo motu cognizance taken in subsequent use of unwarranted manhandling and thrashing of agitating students, mostly women, by UP Police,” NHRC said.

Meanwhile, the Uttar Pradesh government ordered a judicial inquiry into the violence on the campus of the Banaras Hindu University.

"A judicial inquiry has been ordered into the incidents," UP government spokesperson and cabinet minister Srikant Sharma said in Lucknow on Tuesday.

He was speaking to mediapersons after a meeting of the state cabinet chaired by Chief Minister Yogi Adityanath.

Sharma, however, did not elaborate as to whether the probe would be conducted by a retired or sitting judge.

The violence erupted after some students, protesting against the incident on Thursday, wanted to meet the varsity's vice-chancellor at his residence.

As opposition parties targeted the BJP over the police action on the campus, Prime Minister Narendra Modi and BJP president Amit Shah on Monday spoke to the chief minister and asked him to address the issue at the earliest.

Sharma said the government wanted that there should be communication with the students by the local administration, vice chancellor and other university officials.

Sharma accused the opposition parties of trying to vitiate the academic atmosphere.

"If they wish to do politics, they should do it with us and not with students. They should keep away from holding agitations in campuses," he said.

He said the government has asked the local administration to strengthen the security on the campus.

"It has been decided to install CCTV on the campus," he added.