In all 25 candidates will given the vaccine in the next seven days, according to Dr Lalwani 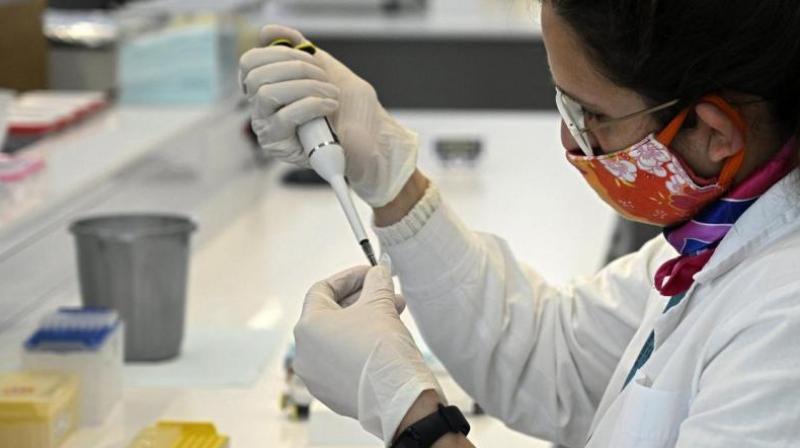 Phase II human trial of Oxford vaccine begins in Pune. A scientist works over an experimental coronavirus vaccine in a laboratory. (AFP Photo)

Pune: The Phase II clinical trial of the Oxford COVID-19 vaccine, being manufactured by the city-based Serum Institute of India (SII), began at a medical college and hospital here on Wednesday.

Two male volunteers were administered the vaccine at Bharti Vidyapeeth's Medical College and Hospital, a senior office-bearer of the hospital said.

The trial began around 1 pm, he said.

"Doctors at the hospital administered the first shot of the 'Covishield' vaccine to a 32-year-old man after his reports of COVID-19 and antibodies tests came out negative," Medical Director of Bharti Vidyapeeth's Medical College, Hospital and Research Centre, Dr Sanjay Lalwani, said.

Another 48-year-old male volunteer was also given the vaccine, he added.

While the 32 year-old volunteer works for a private company, the other one is associated with the healthcare sector, he said.

"Before administering the vaccine, doctors checked their temperature, blood pressure and heart beats," he said.

Five volunteers had enrolled themselves for the trial after the doses were received from the SII on Tuesday, he added.

"The COVID-19 and antibodies tests were conducted on all the five volunteers. Of them, the reports of three volunteers' antibodies test came out positive. So they became ineligible for the trial," Dr Lalwani said.

"The two other volunteers, who were administered the vaccines are being monitored," he said.

According to Dr Lalwani, in all, 25 candidates will given the vaccine in the next seven days.

SII, the world's largest vaccine maker, has signed an agreement to manufacture the potential vaccine developed by the Jenner Institute of Oxford University in collaboration with British-Swedish pharma company AstraZeneca.