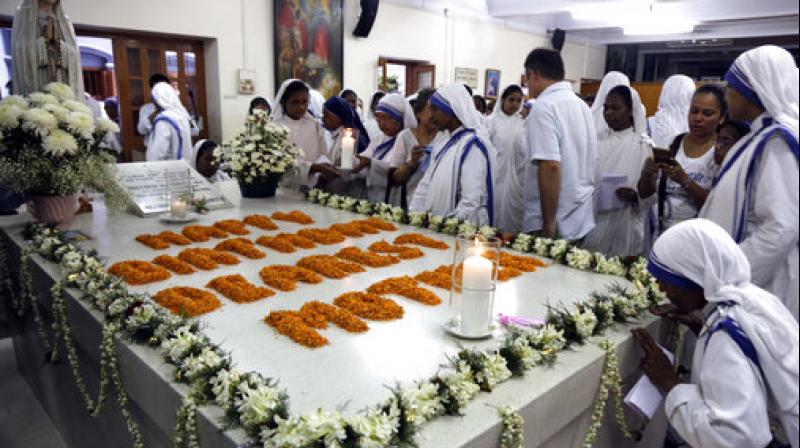 Nuns of the Missionaries of Charity, the order founded by Mother Teresa, pray by her tomb on her birth anniversary in Kolkata, India, Saturday, Aug. 26, 2017. (Photo: AP)

Kolkata: Special masses and prayers were held on Saturday to mark the 107th birth anniversary of Saint Teresa of Calcutta, better known as Mother Teresa.

Candles were lit at her grave at Mother House in Kolkata, the global headquarters of the Missionaries of Charity (MoC), established by her in 1950.

Her grave was decorated with flowers as the sisters led by the MoC Superior General Sister Prema and other eminent persons sang hymns, read from the Bible and recalled her celebrated life.

Sunita Kumar, who was close to Mother Teresa, also attended the programme and placed wreath on her grave.

"We always feel her presence. She is with us all the time, in all the works for the people," she said.

A large number of people, including school children and residents of the various homes run by the MoC, congregated at the Mother House, which wore a festive look.

A special prayer card for the faithful read, "We thank you (Lord Jesus) for the gift of Blessed Teresa of Calcutta, who was elevated to Sainthood in 2016."

Similar programmes were organised at other homes run by the Missionaries of Charity.

West Bengal Chief Minister Mamata Banerjee tweeted, "'Peace begins with a smile.' Homage to @StTeresaOfCal, Mother to many of us, on her birth anniversary."

Saint Teresa of Calcutta was born on August 26, 1910 at Skopje in Macedonia. She died on September 5, 1997, less than a month after her 86th birthday.

She was the recipient of numerous honours including the Nobel Peace Prize in 1979 and the Bharat Ratna in 1980. In 2003, she was beatified as "Blessed Teresa of Calcutta".