Reports said that the militants took up positions in two buildings and were engaged in a gun battle by the security forces. 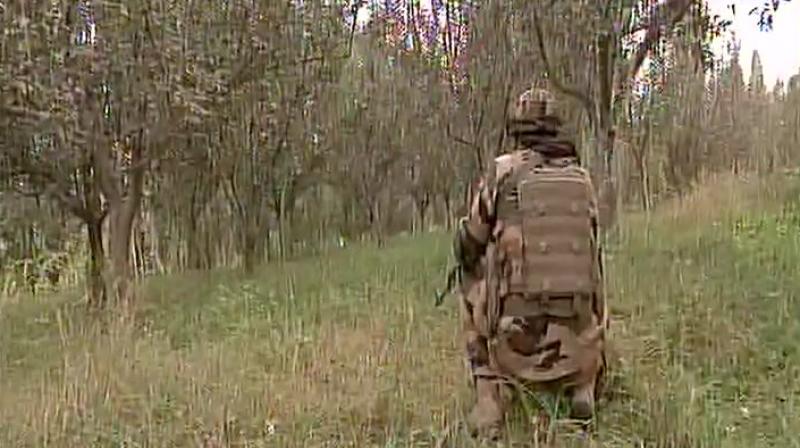 Police officials said that three of the nine security personnel injured in the initial militant attack and subsequent exchange of fire succumbed in hospital or while being shifted there. (Photo: Twitter | ANI)

Srinagar: One of the three heavily armed militants who stormed the District Police Lines (DPL) of the Jammu and Kashmir police in southern Pulwama towns on Saturday morning has been killed in a fierce gun battle, which is underway within the premises.

Earlier two Central Reserve Police Force (CRPF) jawans and a Jammu and Kashmir policeman were killed and six others were injured in the pre-dawn ‘fidayeen’ attack at the DPL, 32-km south of Srinagar.

Inspector General of Police (Kashmir range) Munir Ahmad Khan said that the identity of the slain militant is being ascertained, but added that he appeared to be a foreign national-most probably a Pakistani.

Jaish-e-Muhammad (JeM) has claimed the responsibility for carrying out the attack. A man who introduced himself as the JeM spokesman Hassan Shah telephoned Srinagar-based news agency CNS to say “our valiant Mujahideen stormed the CRPF camp located within the District Police Lines at Pulwama and inflicted casualties upon the armed forces.” He added, “The Indian armed forces have suffered huge damage while the mujahideen are giving them a tough time”.

The officials said that three of the nine security personnel injured in the initial militant attack and subsequent exchange of fire succumbed in hospital or while being shifted there.

Hundreds of Jammu and Kashmir and CRPF officers and jawans were stationed at the DLP when the militants forced their entry into it at 4.30 am.

“After forcing their entry into the premises, the terrorists resorted to indiscriminate firing and also tossed hand grenades,” said a senior police official. The injured security personnel have been admitted to Srinagar’s 92-Base Army Hospital.

The reinforcements from the J&K police’s counterinsurgency Special Operations Group (SOG), the CRPF and the Army rushed to the area and launched a massive operation to flush out militants, the police sources said.

Khan said that all security personnel and other staff and their families trapped inside a building at the DPL were evacuated.

The police denied a hostage situation has occurred at the scene of fighting.

“All the families have been evacuated. There is no hostage situation in the ongoing encounter at the DPL (Pulwama),” a brief statement issued to the media by the Jammu and Kashmir police said.

Reports said that the militants took up positions in two buildings and were engaged in a gun battle by the security forces.

Reports from Pulwama also said that loud explosions were heard amid exchange of gun fire. Two quarters within the premises were in flames as reports last came in. But Khan said that one of the buildings within the DPL caught fire due to a cylinder blast after heavy exchange of fire.

While the encounter was underway, surging crowds clashed with security forces in the Pulwama town. The witnesses said that groups of youth chanting pro-freedom slogans took to the streets at several places in Pulwama and started hurling rocks at the security personnel who retaliated by bursting teargas canisters.

Meanwhile, the gunmen attacked an Army Caspar vehicle with a rifle grenade at Hygam on the outskirts of north-western town of Sopore on Friday night, the official said. No casualties were reported, however.