Yeddy to be CM for 4th time, Cong says he doesn't have numbers

'I will also try to contact Kumaraswamy and Siddaramaiah over phone, to invite them personally,' Yeddy said. 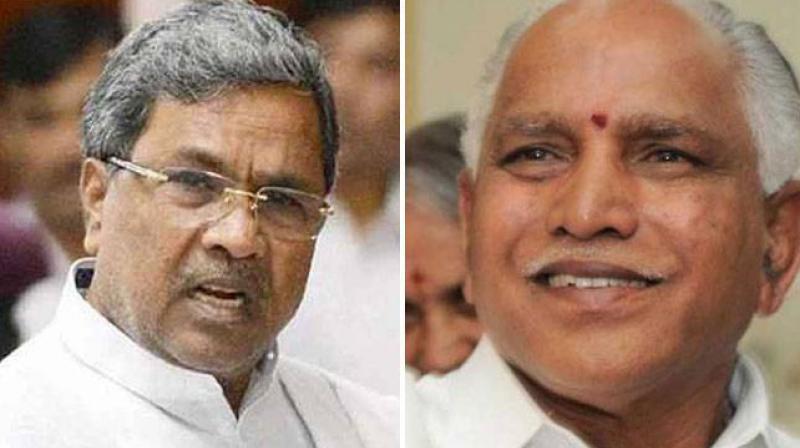 The Congress slammed the move for government formation, saying that since the BJP did not have the numerical strength, it could not stake claim nor take the oath for any reason. (Photo: File)

Bengaluru:  Karnataka BJP President B S Yeddyurappa will be sworn in as Chief Minister for the fourth time on Friday evening, two days after the collapse of H D Kumaraswamy-led Congress-JD(S) government.

In a sudden development, Yeddyurappa met Governor Vajubhai Vala to stake the claim and requested him to administer the oath of office and secrecy Friday itself, following which Vala invited him to form the government.

"I have requested Governor to administer me oath between 6-6:15 pm as the Chief Minister. The Governor has agreed and given me a letter," Yeddyurappa told reporters after meeting Vala at Raj Bhavan. He said, "who all are to be inducted (in the ministry), I will discuss it with our national president and inform."

Yeddyurappa said as he is already Leader of the Opposition, there is no need to call a Legislature Party meeting to elect him the leader. This will be the fourth stint for Yeddyurappa as the Chief Minister-- the last one was after the May 2018 Assembly polls. He had to resign just three days after being sworn in, unable to muster majority after staking claim to form the government on the grounds that his party had emerged as the single largest one with 104 seats in the 225-member Assembly.

Inviting MLAs of all political parties for the swearing in, Yeddyurappa said, he would also be sending a letter of invitation to outgoing chief Minister H D Kumaraswamy and Congress Legislature Party leader Siddaramaiah. "I will also try to contact Kumaraswamy and Siddaramaiah over phone, to invite them personally," he added.

The 14-month-old Congress-JD(S) coalition government collapsed on Tuesday after losing the vote of confidence in the Assembly in a climax to the three-week long intense power struggle. In his letter to the Governor, Yeddyurappa noted that the Kumaraswamy government had lost the vote of confidence in the Assembly and the chief minister had resigned and he was asked to continue till alternative arrangements were made.

"I submit that I am the leader of BJP Legislature Party and also the Leader of Opposition in the Assembly. At present, the strength of the BJP is 105 and the single largest party in the Assembly," he said. "Therefore, I request your Excellency, I may be invited to form alternate government today itself and I will take oath as chief minister of Karnataka at Raj Bhavan between 6 pm to 6.15 pm," the letter said.

The Congress slammed the move for government formation, saying that since the BJP did not have the numerical strength, it could not stake claim nor take the oath for any reason. "Corruption Icon and Former Jail Bird Shri @BSYBJP has used his excellent Horse Trading skills to subvert democracy and come to power," the state Congress tweeted.

"People of Karnataka remember his disastrous tenure as CM between 2008-2011, which ended with BSY in Jail," the tweet added.

Condemning the BJP's move, former Congress chief minister Siddarmaiah said Karnataka has become an experimental lab of the BJP. He tweeted, "Karnataka Assembly has become an experimental lab for Karnataka BJP and the BJP backed governor to try unconstitutional ways to form government. In what article of the constitution is the governor allowed to permit the party to form govt that doesn't have majority? It is shame!!"

He said the BJP has the strength of 105 which is way less than the half way mark. "In no way BJP can form the government if constitution is followed," he said adding, this only proved that BJP has no belief in the democratic values. The JD(S) tweeted, "The strength of the house is 222 (after disqualification of three MLAs) and the half-way mark is 112. However, BS Yeddyurappa approached the governor saying that he has 105 MLAs with him."

The party said the Governor's decision to permit Yeddyurappa to take oath without raising any doubt was anti-democratic. Proving majority in the assembly, winning the by-elections to seats vacated by the resignation of rebel Congress-JD(S) MLAs, and ministry formation will be an immediate challenge for Yeddyurappa, according to senior BJP leaders. Yeddyurappa has to play a balancing act by ensuring that those within the party are not sidelined, while also accommodating the rebel Congress-JD(S) legislators, whose resignation led to the collapse of the coalition government and helped the BJP to come to power, sources added.