Yeddy to take oath as CM at 6 pm today, prove majority by July 31

He also said that he would request the Governor to hold oath ceremony on Friday itself. 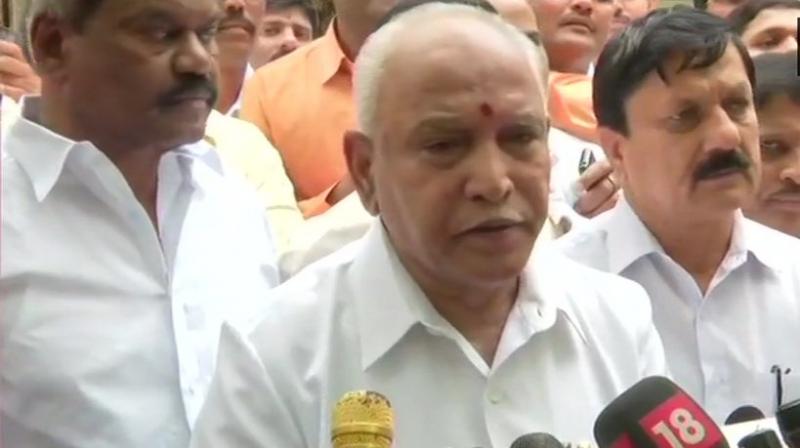 Bengaluru: Karnataka’s BJP president BS Yeddyurappa on Friday met the state Governor. After the meeting, Yeddyurappa said, " I just met the Governor. I will take oath as Chief Minister today at 6 pm."

BS Yeddyurappa will have to prove majority in the assembly by July 31, reported news agency ANI.

Yeddyurappa also submitted a letter to the Governor staking claim to form government in the state, three days after the 14-month old Congress-JD (S) coalition government fell after losing the trust vote.

"I submit that I am the Leader of BJP Legislature Party and also the Leader of Opposition in the Assembly. At present, the strength of the BJP MLA is 105 and the single largest party in the assembly... I may be invited to form alternate government today itself and I will take oath as Chief Minister of Karnataka at Raj Bhavan between 6 pm to 6:15 pm," Yeddyurappa wrote in his letter to the Governor.

The 76-year-old first took charge as the Chief Minister of Karnataka in 2007 but could hold on to the post for mere seven days as the JD(S) withdrew support and President's rule was imposed in the state. He again made way to the coveted post in 2008, but owing to corruption charges failed to complete a full term.

During his second term, he held the post from May 2008 to July 2011. He had to resign following accusations of corruption in illegal land deregulation notification scam.

Thereafter in 2012, he formed a new party "Karnataka Praja Paksha" but rejoined the BJP before the 2014 Lok Sabha elections in which he got elected from Shimoga Lok Sabha constituency.

In 2018, the BJP veteran again jostled his way to the top post in the state but could not rule the state for more than a week as his party failed to garner a majority.

Right after the defeat of the Congress-JD(S) government in the trust vote in the Assembly on Tuesday, HD Kumaraswamy proceeded to the Raj Bhavan and submitted his resignation to the Governor.

Vala accepted Kumaraswamy's resignation and asked him to continue as the caretaker Chief Minister till the new government takes over.

The confidence motion moved by Kumaraswamy got 99 votes as against 105 of the opposition leading to its defeat.

This brought an end to the 12-day high-voltage political drama which had begun in the state with the resignation of over a dozen rebel MLAs to Speaker K R Ramesh Kumar.

The defeat marked the end of an uneasy coalition that was formed after the assembly polls on May 23, 2018, which returned a hung verdict after three main parties in the state- Congress, BJP and the JD (S) - fought each other in the polls.

There were differences between the coalition partners that often came to the surface but they carried on against the threat of BJP.