Nalini Sriharan out of jail on parole for 30 days

She had been out of on parole earlier as well, but not for a period that extends to a month. 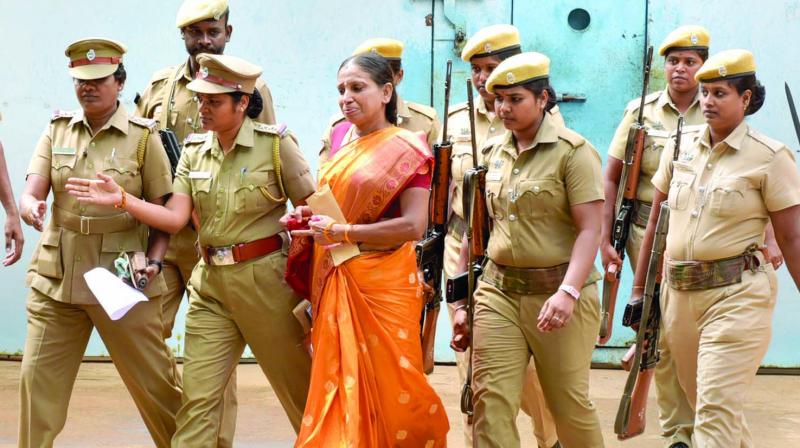 Nalini Sriharan, one of the seven convicts in the Rajiv Gandhi assassination case, is released from prison on 30-day parole amid tight security for her daughter’s wedding in Vellore district on Thursday. (Photo: PTI)

Vellore: Nalini Sriharan, one of the seven convicts in the Rajiv Gandhi assassination case, was released from a prison here on Thursday on a 30-day parole amid tight security to make arrangements for her daughter’s wedding.

Imprisoned since 1991, this is the first time Nalini will be out on parole for 30 days. She had been out of on parole earlier as well, but not for a period that extends to a month.

“She has been released on parole. The relief to her comes with several conditions,” a prison official told PTI. As soon as Nalini, clad in a golden yellow saree, walked out of the main gate of the Special Prison for Women here, she was escorted to a police van and taken to the residence of a pro-Tamil, Dravidian outfit leader at Rangapuram here where she will stay during her leave.

She was given an emotional welcome by her mother, Padma, who performed a traditional “arti” ritual.

In 2016, when Nalini’s father, P. Sankara Narayanan, died, she was granted emergency leave for 12 hours to participate in the funeral and later, allowed one day to take part in the 16th day of post-death rituals.

In 2004, she was allowed to go for the wedding of her brother, Bhagyanathan.

The 12-point conditions of her parole include a bar on her from interacting with the media, political parties or personalities and an undertaking to keep good conduct and not disrupt public peace.