India   All India  26 Jul 2019  Naga political solution has to be achieved within a year: Outgoing governor Acharya
India, All India

Naga political solution has to be achieved within a year: Outgoing governor Acharya

He expressed hope that the new governor will deliver goods to the people and work for the solution of the Naga political issue. 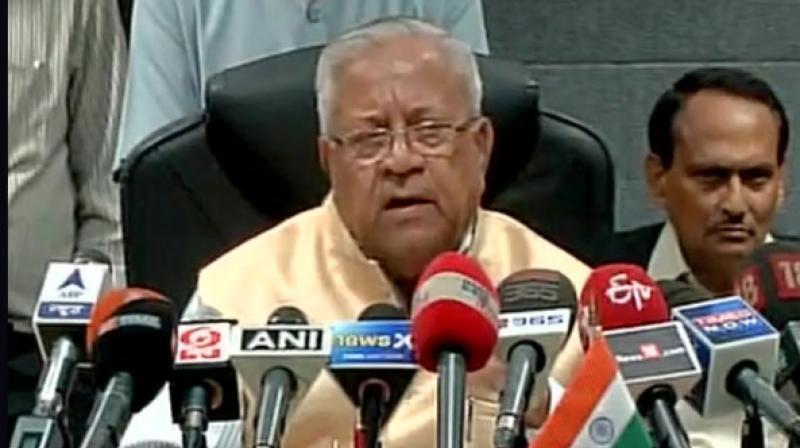 Acharya was sworn in as the 19th Governor of Nagaland on July 19, 2014. His successor, R N Ravi, is scheduled to take charge on August 1. (Photo: File)

Kohima: A political solution to the Naga issue has to be achieved within a year because Nagaland needs permanent peace for development and progress, outgoing governor PB Acharya has said.

"And for this, we have Prime Minister Narendra Modi, who has the will and guts to resolve the issue," Acharya said while addressing a farewell programme, organised by the state government, on Thursday.

Noting that Nagaland is rich but Nagas are economically weak, he said, "We also need to march along with other states towards development and progress."

Acharya was sworn in as the 19th Governor of Nagaland on July 19, 2014. His successor, R N Ravi, is scheduled to take charge on August 1.

He expressed hope that the new governor will deliver goods to the people and work for the solution of the Naga political issue.

Ravi had been the Centre's interlocuter for the Naga peace talks.

Acharya also offered to extend his support to the state, whenever required. "I am leaving as the governor of the state but not the Nagas, and I will always be at your disposal," he said.

Mentioning that the Naga people were fortunate to have such an eminent personality as their governor, Chief Minister Neiphiu Rio said, the people have been enriched through his guidance and leadership.

"Your support to the governments efforts towards realising permanent peace and solution to the Naga political issue is well appreciated," Rio said.

As constitutional head of the State, Acharya had a meticulous and exemplary tenure, the chief minister said.

"The state experienced a few political crises during the past few years but the governor conducted himself in an impeccable manner and upheld the Constitution of India in exemplary fashion, for which he deserves to be complimented," the chief minister said.

Leader of Opposition T R Zeliang expressed hope that Acharya will continue to support the Naga people for an amicable solution to the Naga political problem.

He also recalled the framework agreement signed between the NSCN-IM general secretary Thuingaleng Muivah and the governments interlocutor R N Ravi, in the presence of PM Modi, on August 3, 2015.

As the governor, Acharya had played his role in this event, which makes him an integral part of Naga history, Zeliang said.

The agreement had come after over 80 rounds of negotiations spanning 18 years, with the first breakthrough made in 1997 when the ceasefire agreement was sealed after decades of insurgency in Nagaland, which started soon after
the country's independence in 1947.