Jethmalani has also written a letter to the Delhi Chief Minister asking him to clear his legal fees amounting to Rs. 2 crore. 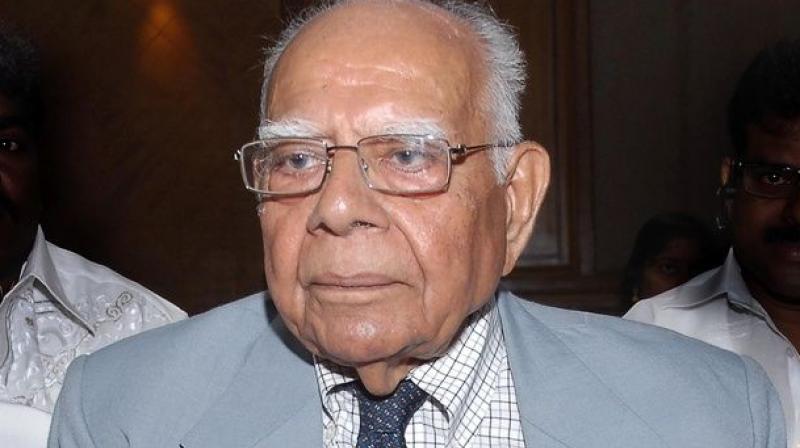 Jethmalani had used the word 'crook' against the Finance Minister during his cross-examination before a Joint Registrar. (Photo: File)

New Delhi: Announcing that he has quit as the counsel of Arvind Kejriwal in the civil defamation suits filed by Finance Minister Arun Jaitley, Senior Supreme Court lawyer Ram Jethmalani on Wednesday accused the Delhi Chief Minister of blatantly lying to him.

"The reason behind it is he (Kejriwal) has spoken a lie. He has gone and said that I have not given any instructions, but fact is he did and I have them recorded. I'm not disappointed at all; I did all that I could do. If he does not pay me I don't mind, because I have fought for many for free. It does not make a difference if I lose one," Jethmalani said.

Expressing his anger over the issue, Jethmalani further stated that if (Kejriwal) can't pay bills then he will appear for him and treat him as a 'poor client'.

"He (Kejriwal) does not want a lawyer so why should I fight for him. The case is not pending but I have decided that I'm no longer going to work with him," Jethmalani said.

Jethmalani's decision came after the Aam Aadmi Party Chief told the Delhi High Court that there was no instruction from him to his counsel to use objectionable remarks against Arun Jaitley in the defamation case filed by the Union Minister.

Jethmalani had used the word 'crook' against the Finance Minister during his cross-examination before a Joint Registrar.

Jaitley had then asked if the slur had been authorised for use by the Chief Minister. When Jethmalani said it had, the Finance Minister said he could seek aggravated damages.

Kejriwal also said that he has written a letter to Jethmalani to refute his claim that objectionable words were used in the proceedings before the Joint Registrar on May 17 as per his instructions.

Jethmalani has also written a letter to the Delhi Chief Minister asking him to clear his legal fees amounting to Rs. 2 crore.

In December 2015, Jaitley had filed a civil defamation suit against Kejriwal and AAP leaders Kumar Vishwas, Ashutosh, Sanjay Singh, Raghav Chadha and Deepak Bajpayee, claiming that they made "false and defamatory" statements in the case involving the Delhi & Districts Cricket Association (DDCA) thereby harming his reputation.