India   All India  26 Jul 2017  Uproar in RS over Prez's equation of Gandhi with Deen Dayal
India, All India

Uproar in RS over Prez's equation of Gandhi with Deen Dayal 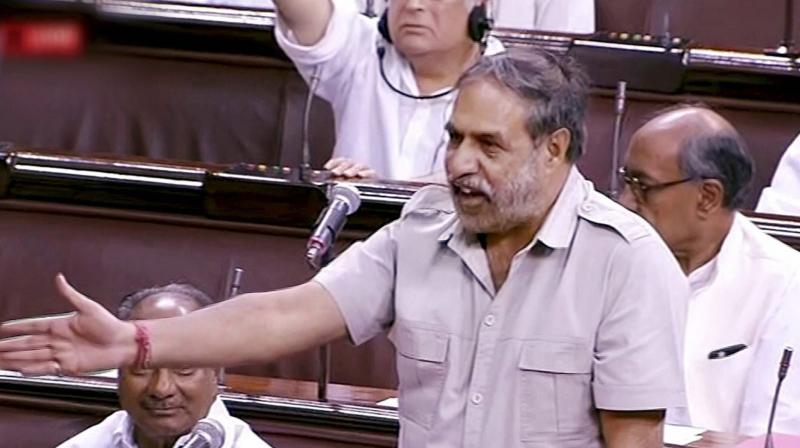 Sharma said, "Gandhi ji has done a lot for the nation and his equation with Deen Dayal Upadhyaya was a big disrespect. Jawahar Lal Nehru and Indira Gandhi's names were not even taken."

Supporting his colleague in this point, Congress leader Ghulam Nabi Azad asserted that the Centre has been constantly disrespecting the Nehru family.

The chairperson, however, did not allow a discussion on the argument calling it "irrelevant".

Hitting back, Union Defence Minister Arun Jaitley said the Congress raised the point for the sake of television cameras.

"The Chair should be guided that the zero hour can't run only for the benefit of the television channels," said Jaitley.

Earlier on Tuesday, Azad came down heavily upon Kovind for not mentioning Nehru's name in his speech and said he should 'rise above the party politics.'

Reacting to the criticism by Congress, Union Minister and BJP leader Ravi Shankar Prasad said the Congress party is seeking to impact upon the great stature of Nehru, by insisting that his name should be taken in every speech.

"Kovind ji talked about the philosophy of Ambedkar ji. He talked about the extraordinary contribution of Sardar Patel. The Congress is seeking to impact upon the great stature of Nehru ji, by insisting that his name should be taken always. I would only urge that everything should not be politicised," Prasad said.

Addressing the gathering at the Central Hall of Parliament, Kovind, who was sworn-in as the 14th President of India on Tuesday, remembered Mahatma Gandhi, Bhim Rao Ambedkar and Sardar Vallabhbhai Patel as patriotic freedom fighters.

"Our Independence was the result of efforts by thousands of patriotic freedom fighters led by Mahatma Gandhi. Later, Sardar Patel integrated our nation. Principal architect of our Constitution Babasaheb Bhim Rao Ambedkar instilled in us the value of human dignity and of the republican ethic," he added

"We need to sculpt a robust, high growth economy, an educated, ethical and shared community, and an egalitarian society, as envisioned by Mahatma Gandhi and Deen Dayal Upadhyay ji," the President said.