Key to India’s success is its diversity, says Kovind after taking charge. 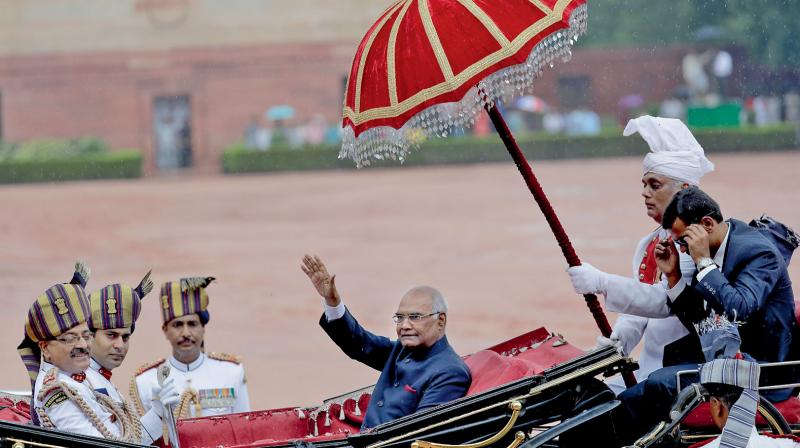 President Ram Nath Kovind waves as he arrives in a traditional horse-driven carriage at the Rashtrapati Bhavan in New Delhi on Tuesday after being sworn in. (Photo: AP)

New Delhi: Former Bihar governor Ram Nath Kovind was sworn in as the 14th President of India on Tuesday. Mr Kovind, who succeeds Pranab Mukerjee, is first BJP leader and the second dalit to hold the country’s highest constitutional post.

In his first speech after being sworn in, Mr Kovind recalled his long journey from a “mud house” in a small village to the 350-acre Rashtrapati Bhavan, and said that it’s the basic mantra in the Constitution — justice, liberty, equality and fraternity — which “guides us to carve out pathways for those from a less fortunate background.”

“It is so telling of our nation and our society also... For all its problems, it follows that basic mantra given to us in the Preamble to the Constitution — of ensuring justice, liberty, equality and fraternity — and I will always continue to follow this basic mantra.”

Mr Kovind was sworn in by Chief Justice of India J.S. Khehar at Parliament’s Central Hall. Soon after his swearing in, some BJP MPs chanted “Jai Shree Ram” and “Bharat Mata ki Jai.”

Mr Kovind, 71, in his acceptance speech said the “key to India’s success is its diversity” which makes it “unique”, and that India of the 21st century will be “one that is in conformity with our ancient values as well as compliant with the fourth industrial revolution.”

“In this land we find a mix of states and regions, religions, languages, cultures, lifestyles and much more. We are so different and yet so similar and united,” he said.

Stressing on access and opportunities for the “last person and the last girl-child from an under-privileged family,” the President said, “We have achieved a lot as a nation, but the effort to do more, to do better and to do faster should be relentless. This is especially so as we approach the 75th Year of our Independence in 2022.”

Mr Kovind said the country needs to sculpt a robust, high growth economy, an educated, ethical and shared community, and an egalitarian society as envisioned by Mahatma Gandhi and BJP ideologue Deen Dayal Upadhyay. He said the principal architect of the Constitution, Babasaheb Bhimrao Ambedkar, instilled in the people “the value of human dignity and of the republican ethic.”

The change of guard began in the morning when military secretary to the President, Major General Anil Khosla, reached 10, Akbar Road, Mr Kovind’s temporary residence, with a motorcade and knocked on his door. Outgoing President Pranab Mukherjee received Mr Kovind and his wife in the study of the Rashtrapati Bhawan. Both then went to the grand Rashtrapati Bhavan forecourt, also known as the Jaipur Column, where they were escorted to the saluting dais. Mr Mukherjee took the last salute of the President’s Bodyguard (PBG) with Mr Kovind standing to his left.

A black presidential limousine, with Mr Mukherjee in the right and Mr Kovind on the left, followed by President’s cavalcade and escorted by PBG’s equestrian procession escorted them to Parliament.

The road from Rashtrapati Bhavan to Parliament was lined with 1,000 jawans from all three services of the armed forces offering the traditional “hazaar salaam” to the president — the supreme commander of the defence forces.

After Justice Khehar administered the oath of office to “preserve, protect and defend the constitution and law,” Mr Kovind exchanged seats with Mr Mukherjee.

After the ceremony, Mr Kovind met leaders across the political spectrum who had gathered in Central Hall. He then left for the Rashtrapati Bhavan in the presidential limousine — this time with Mr Mukherjee on the left and India’s new President on the right. Mr Kovind inspected the Guard of Honour and went inside. He came back outside to the forecourt, escorting Mr Mukherjee, who was given a last Guard of Honour.

Mr Kovind then accompanied Mr Mukherjee in the presidential limousine to see him off to his new residence — 10, Rajaji Marg, once occupied by the late Dr Kalam.

As Prime Minister Narendra Modi entered the hall before the start of the function, he was welcomed by BJP MPs, chief ministers and Union ministers with thumping of desks. Mr Modi exchanged pleasantries with Ms Banerjee who was seen seated with her party MPs in the rear rows of the hall while most other chief ministers were in the front rows.

Congress vice-president Rahul Gandhi was seated in one of the rear rows with the four of the six party MPs — M.K. Raghavan, Gaurav Gogoi, Sushmita Dev and Ranjeet Ranjan — who were among the six suspended for their “highly unbecoming” conduct in Parliament.