Kumar said his resignation was accepted by the governor who asked him to continue as CM till an alternative arrangement has been made. 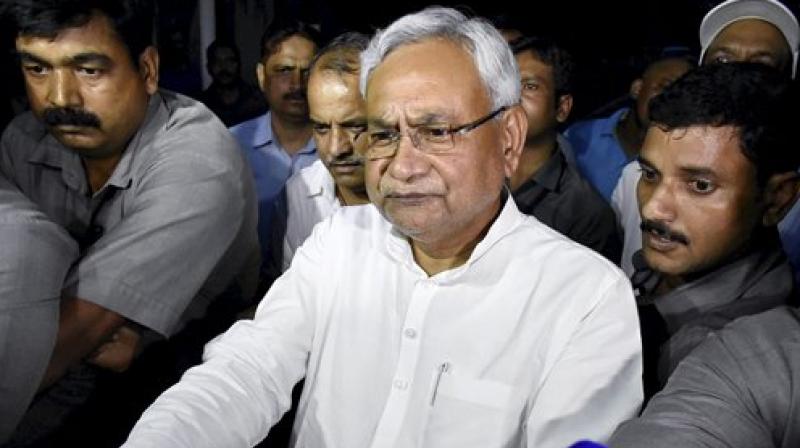 Kumar's resignation capped days of stand-off between his party JD(U), which was insisting on Tejaswi defending himself against the allegations, and the RJD, whose chief Lalu Prasad rejected the demand outright.

"In the circumstances that prevail in Bihar, it became difficult to run the grand alliance government," Kumar told reporters outside Raj Bhavan after submitting his resignation to Governor Keshri Nath Tripathi.

He did not rule out taking BJP's support for forming a new government.

Prime Minister Narendra Modi praised Kumar for "joining the fight against corruption" saying the entire nation supports his honesty, a move seen as an effort to reach out to the BJP's former ally. JD(U) had ended its 17-year association with BJP after Modi was nominated the saffron party's campaign committee chief for 2014 Lok Sabha elections.

"Congratulations! Mr Nitish Kumar for joining the fight against corruption."

"1.25 crore people are welcoming and supporting his honesty," he said in a series of tweets.

"For the bright future of the country, and especially Bihar, it is the need of the hour to rise above political differences and join the fight against corruption," Modi said.

Kumar, when asked about the chances of his forming a government with BJP's support, said,"Whatever will be in the interest of Bihar will be done. Wait for the future to unfold. Whatever had to happen has happened. Now see what happens next."

Kumar said his resignation was accepted by the governor who asked him to continue as CM till an alternative arrangement has been made.

"I tried to work it out....I did not ask for anybody's resignation...I just asked Tejaswi to explain the charges of corruption," he said.

The sudden development has thrown the politics of Bihar into turmoil with no party having a majority in the 243-member Assembly. Kumar's JD(U) has 71 seats, while RJD headed by Tejaswi Yadav's father Lalu Prasad, has 80.

The BJP has 53. If JD(U) and BJP come together, the coalition would have a majority in the Assembly. State BJP president Nityanand Rai had recently spoken about the possibility of his party extending outside support to JD(U) but clarified the decision would be taken by its central leadership.

Tensions simmered between the two alliance partners ever since the CBI registered a case against Lalu Prasad, his wife and former chief minister Rabri devi and son Tejaswi in a land-for-hotels case.

The offence was allegedly committed when Lalu was the railway minister in the UPA government. He was allegedly instrumental in handing over the maintenance of two hotels of Indian Railways-owned PSU ICRTC to two Patna businessmen in return for a prime plot of land in the Bihar capital where his family is now constructing a shopping mall.

Reacting to the development, Lalu gave a new twist to it, saying a pending case against Kumar and not the differences over corruption charges against Tejaswi was at the root the the JD(U) leader's "resignation drama".

In the 1991 Lok Sabha polls, a woman was killed at a polling station in Pandarak and Nitish Kumar is among the accused. He had made a mention of the case in the affidavit he filed while contesting the Legislative Council election, Lalu told a press conference.

He claimed a court in Barh had taken cognizance of the charges against Kumar in 2009 and that the case was still alive in the Patna High Court.

"Nitish knew that he was soon going to be hauled up by the court and will have to quit in any case. He made the Tejaswi issue a ruse to exit before that happens," the RJD boss claimed.

He slammed Kumar for seeking explanation from Tejaswi over graft charges against him, saying "We will give the documents to CBI. Who are they to ask for it? Has Tejaswi engaged in any act of corruption as a minister in Bihar?"

"There is the involvement of Narendra Modi in all this. Nitish has slapped the people of Bihar and now people like Sushil Modi (a top state BJP leader and former deputy chief minister) are eager to form government with JD(U)," he said.

Replying to a question, Lalu said he had not sacrificed the grand alliance government for "love of his son".

"We were the largest party in the grand alliance. Tejaswi got the post of the deputy chief minister. We had the mandate of the people," he said.

On his part Nitish Kumar said,"I ran the coalition government for 20 months, which is one-third the term of the grand alliance, despite facing great difficulties...but it was not possible for me to run the coalition any longer in such an environment."

Kumar said he had informed Lalu and Congress in-charge of Bihar C P Joshi before heading to the Raj Bhavan to tender his resignation.

"While supporting demonetisation, I had suggested that it could yield good results only if there is a simultaneous attack on benami property (a property which is not registered in the name of its real owner). How can I back out of it," he said.

Several members of Lalu's family, including his MP daughter Misa Bharti and son-in-law Shailesh Kumar have been accused of acquiring benami properties with tainted money.

Kumar said he had met Congress vice president Rahul Gandhi seeking his intervention to resolve the issue. "I met Rahul Gandhi who had torn an ordinance that sought to enable people sentenced to more than two years in jail to contest elections (a move that was seen as an attempt to help Lalu). But except for some superficial talk nothing happened," he said.

"I heard the voice of my conscience and decided to pull myself out of this coalition," he said.

He said he "knocked every door" to salvage the alliance, but in vain.

"They wanted me to save them in their time of crisis. Given my nature and style of work that could not have happened," Kumar said.

He said had Tejaswi resigned of his own volition, he would have grown in stature. "But everybody chooses his own path. I don't want to blame anybody."