Indian Medical Association President K K Aggarwal says Krishna, in the true sense, was the first and perhaps the most celebrated counsellor 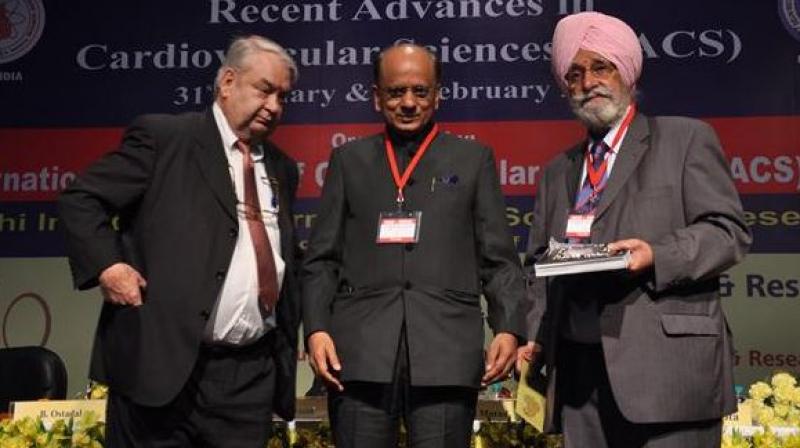 He says the Vedic approach to mental health focuses on controlling the mind, intellect and ego.  (Photo: kkaggarwal.com)

New Delhi: The epic Mahabharata is full of pointers to issues of psychiatric dimensions and offers many answers, says national president of the Indian Medical Association (IMA) K K Aggarwal who considers Lord Krishna as the most celebrated counsellor.

He says Krishna, in the true sense, was the first and perhaps the most celebrated counsellor, whose "sessions with his patient Arjuna not only led to his spectacular recovery but also constituted" one of the most revered ancient texts -- the 700-verse Bhagavad Gita.

"The history of psychiatry in India begins with Lord Krishna's successful counselling of Arjuna before the 18-day battle of the Mahabharata," Aggarwal writes in The Equator Line magazine’s latest issue 'Cobwebs Inside Us', which deals with mental health.

At a time when there were no psych drugs or mental-health professionals, the Sanskrit epic seem to have offered a few answers to ancient Indians, he says in his write-up titled "Psychotherapy in the time of the Vedas".

Aggarwal says the Vedic Indian did not know about anti-depressants but it was a time when the "bucolic environment -- woods running along the river banks, deer prancing around, peacocks strutting close to the courtyard -- had its own way of healing the bruised mind".

Today, he says, there is an assortment of drugs that nourish the mental health of an individual and the prescription differs from person to person.

He says the Vedic approach to mental health focuses on controlling the mind, intellect and ego.

"Lord Shiva presents a very Vedic way of anger management. Whenever you are filled with resentment, store the negative thoughts in your throat. After some time, think about the issue at hand with a cool mind," he writes.

In the article ‘Of the mind and its maladies’, AIIMS psychiatrists Dr Rajesh Sagar and Dr Ananya Mahapatra write: "The future demands scaling up of a wide variety of interventions, ranging from public awareness, early identification, treatment of acute illness, family education, long-term care, rehabilitation, reintegration into society, ensuring of human rights of the ill persons, and efforts to reduce the prevalent stigma and discrimination against these patients."

Bhaskar Roy writes in the editorial: "This is the new killer stalking each one of us. The good thing is mental illness is no longer a subject pushed behind the screen.

“Everybody is talking about it, Bollywood actor Deepika Padukone openly talked about her depression and her struggle to come out of it. Now, she is a campaigner for mental health and an inspiring story herself."