India   All India  26 Jul 2017  Sin to declare someone dead without proof: Sushma on Indians missing in Iraq
India, All India

Sin to declare someone dead without proof: Sushma on Indians missing in Iraq

The external affairs minister said she had never misled Parliament or the families of the abducted Indians. 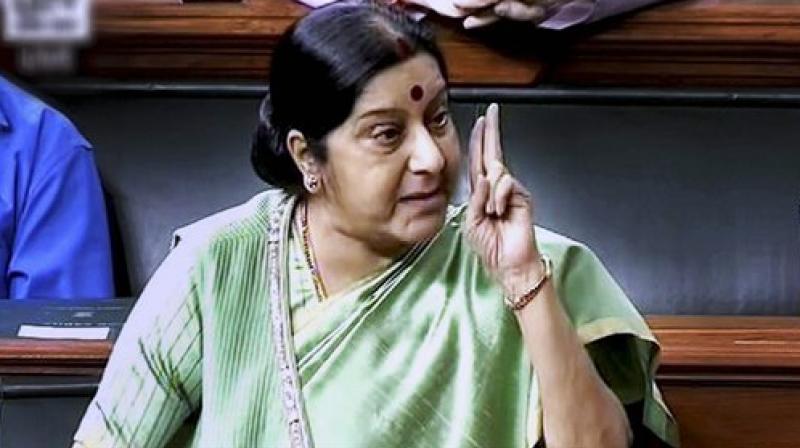 Denying the claims of Harjit Masih (the Indian who returned home from Iraq)  that the Indian nationals have been killed, the minister said that six sources have confirmed of the Indians being alive. (Photo: File)

New Delhi: There is no concrete evidence that the 39 Indians abducted from Mosul in Iraq have been killed and "I will not commit the sin" of declaring them dead without any evidence, External Affairs Minister Sushma Swaraj said on Wednesday.

Making a forceful statement in the Lok Sabha, Swaraj said the government will continue its efforts to trace the Indians till it gets evidence that they were dead.

"This file will not close till there is proof that the 39 Indians were dead. I will not commit the sin of declaring them dead without any evidence," Swaraj said, two days after holding talks with Iraqi foreign minister on the issue.

The external affairs minister said she had never misled Parliament or the families of the abducted Indians.

The Iraq Embassy had on Sunday informed India that search operations are underway to locate the 39 missing Indians who were taken as prisoners by ISIS in 2014, further assuring there is a high level coordination between Iraqi and Indian concerned authorities to locate them.

However, Iraqi Ambassador to India Fakhri H Al-Issa had said that the Embassy has no information about the missing 39 Indians citizens.

"I don't want to say anything. I have no information. Sometimes no news is good news. They might be in Badush prison," Issa said.

Sushma Swaraj, along with Minister of State (MoS) for Ministry of External Affairs (MEA) M.J. Akbar and MoS MEA Gen. (Retd.) VK Singh, met families of 39 Indians who are missing in Iraq since 2014 on July 16.