Till 9 pm on Tuesday, 23 people were pulled out, of whom 12 were declared dead while 11 injured were admitted to hospitals. 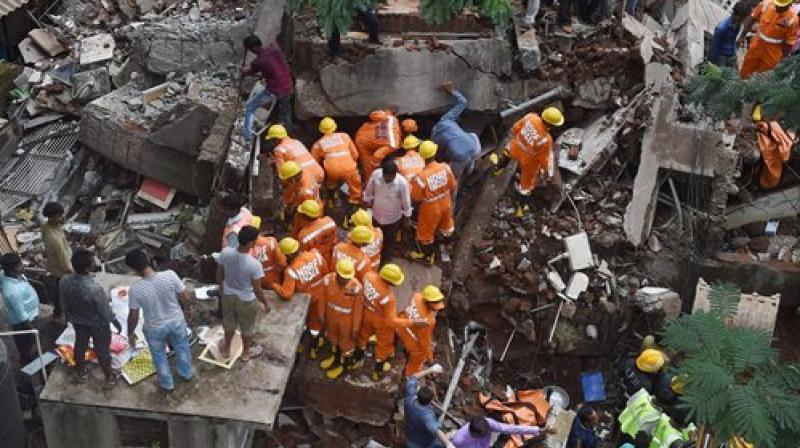 Fire brigade and NDRF personnel carrying out a search and rescue operation following a building collapse at Ghatkopar in Mumbai on Tuesday. (Photo: PTI)

Mumbai: The death toll in the Ghatkoparbuilding collapse on Wednesday rose to 17 after five more bodies were pulled out from the rubble of the four-storey building during overnight search and rescue operations, a civic official said.

"Our rescue team along with the fire brigade and NDRF jawans extricated 28 people from the debris out which 17 people have been declared dead while 11 injured have been admitted in the nearby Shantiniketan, and the Rajawadi hospitals," an official of the disaster management unit of the Brihanmumbai Municipal Corporation (BMC) said.

Five more bodies were pulled from the rubble of the residential building in suburban Ghatkopar during the operations through the night during which two firemen were injured and shifted to a hospital, the official said.

The search and rescue operations are still underway.

According to residents of the ill-fated Siddhi-Sai Cooperative Housing Society, the pillars of the building got weakened due to ongoing renovation of a nursing home located on its ground floor, reportedly owned by a local Shiv Sena leader, leading to the collapse on Tuesday.

The city and its suburbs received heavy rains over the last several days, though there has been some respite since Tuesday with downpour giving way to intermittent showers.

Till 9 pm on Tuesday, 23 people were pulled out, of whom 12 were declared dead while 11 injured were admitted to hospitals.

The BMC made temporary accommodation arrangements for the affected people and the survivors in three nearby municipal schools, however, survivors preferred to stay at their relatives' homes.

Meanwhile, BJP MP Kirit Somaiya, who visited the crashed site on Tuesday after flying from Delhi, said he will ensure that the affected and aggrieved people get proper relief and rehabilitation as soon as possible.

Maharashtra Chief Minister Devendra Fadnavis visited the collapse site on Tuesday night and, "An offence has been registered and police are investigating. I have directed the commissioner of BMC to investigate and submit report within 15 days."