Releasing the government’s statement, MEA spokesperson said that China has now “shifted its position” to claim the Galwan Valley 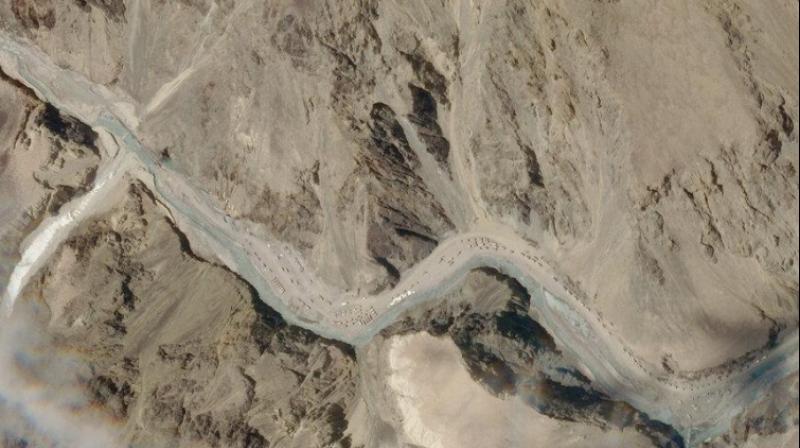 This satellite photo provided by Planet Labs shows the Galwan Valley area in the Ladakh region near the Line of Actual Control between India and China Tuesday, June 16, 2020. ( AP Photo)

New Delhi: Signalling that there has hardly been any de-escalation so far despite ongoing diplomatic and military talks with Beijing, India admitted on Thursday that a large number of Chinese troops remain deployed in border areas along the Line of Actual Control (LAC).

In its hardest statement ever since the Ladakh standoff began in May, New Delhi said, “The deployment of a large body of troops and changes in behaviour (of PLA soldiers) has also been aggravated by unjustified and untenable claims.”

Several rounds of talks have taken place between the two countries' senior military and foreign ministry officials and there have been assurances from the Chinese to carry out the mutually-agreed de-escalation, but there has been no change on the ground, New Delhi indicated, hinting at a disquieting level of distrust of the Chinese establishment and its Army.

“At the heart of the matter,” Mr Srivastava said, “is that since early May, the Chinese side has been amassing a large contingent of troops and armaments along the LAC. This is not in accordance with the provisions of our various bilateral agreements... Both sides remain deployed in large numbers in the region, while military and diplomatic contacts are continuing.”

Squarely putting the blame on Beijing for the June 15 clash and rising tension between the two nuclear-armed nations, India said that a large number of its troops are now positioned on the border as a counter-deployment measure.

India's statement comes a day after satellite images, taken by US satellite firm Maxar on June 22, emerged showing Chinese soldiers near patrolling point 14 in Galwan river valley. The images, and reports of fresh Chinese incursions in Depsang and Daulat Beg Oldie areas, coincided with a meeting between the ministry of external affairs’ joint secretary Naveen Srivastava and director general in the Chinese foreign ministry Hong Liang, on Wednesday.

Blaming China for the behaviour of its troops and for trying to change the status quo on the LAC, which led to clashes on June 15 in which 20 Indian soldiers were killed, New Delhi on Thursday warned that the continuation of the present situation would further vitiate the atmosphere and severely damage bilateral ties.

While narrating the chronology of events since May, MEA spokesperson Anurag Srivastava said, “The Indian side has never undertaken any actions across the LAC and has never attempted to unilaterally change the status quo. However, that has not been reciprocated by the Chinese side and that from time to time has led to face-offs... (Indian troops) have been patrolling all along the LAC, including in the Galwan Valley, for a long time."

He added, "All infrastructure built by the Indian side has always been on its own side of the LAC… The deployment of a large body of troops and changes in behaviour (of PLA soldiers) has also been aggravated by unjustified and untenable claims. The recent shift in the Chinese position on the Galwan Valley is one example... (It has been) clearly established it has been the Chinese actions thus far which have led to increase in tension in the region and also to the violent face-off of 15th June with casualties.”

New Delhi further noted, “The foreign ministers of the two countries had a conversation on 17 June 2020 and had agreed that the overall situation would be handled in a responsible manner, and that the disengagement understanding of 6 June would be implemented… We expect that the Chinese side to sincerely follow up on this understanding and ensure the expeditious restoration of peace and tranquility in the border areas.”