India   All India  26 Jun 2017  Darjeeling stir: Why considered foreigners after being born on Indian soil, Gorkhas ask
India, All India

Darjeeling stir: Why considered foreigners after being born on Indian soil, Gorkhas ask

With supplies running out and vacations to start shortly, boarding schools in Darjeeling are facing a harrowing time due to the shutdown. 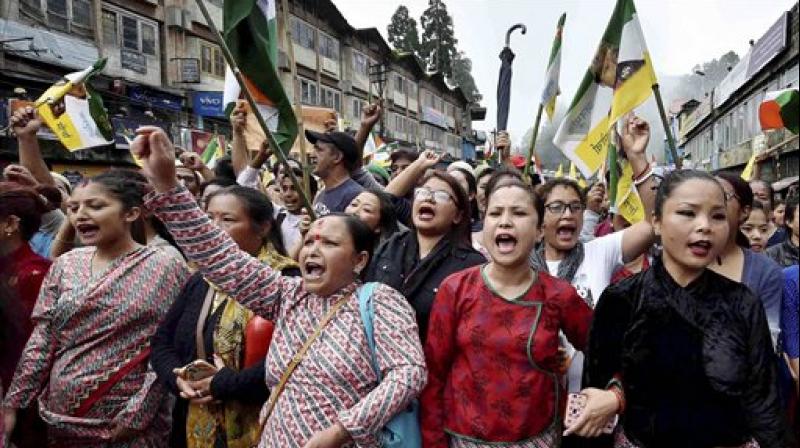 People raise slogans as they participate in a mass rally to demand for a separate state of 'Gorkhaland' in Darjeeling on Saturday. (Photo: PTI)

Darjeeling: As the indefinite shutdown in Darjeeling entered its 11th day on Monday, the Gorkhas expressed their dejection over doubts being raised about their nationality.

Bharatiya Gorkha Bhutpurav Sainik Kalyan Sangathan secretary D P Gurung questioned as to why were they considered foreigners in spite of being born on Indian soil.

Gurung said their ancestors served in the Indian Army then why are they considered outsiders.

On Sunday, the Gorkha Janmukti Morcha (GJM) gave a 12 hour relaxation of its indefinite strike for the Muslim community on the eve of Eid.

An indefinite bandh was called in the hills by GJM on June 15.