Heartbroken, the couple has decided to write to Prime Minister Narendra Modi for his support for prohibition of liqour in Odisha. 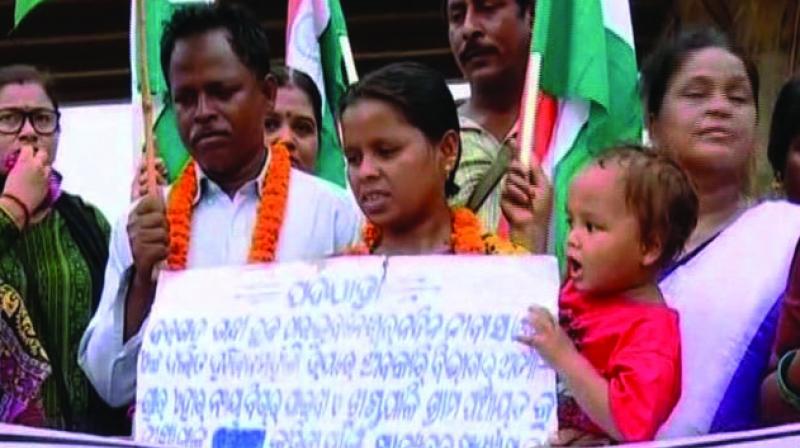 Bhubaneswar: A dalit couple from Odisha’s Bargarh district marched for around 400 kilometres to meet chief minister Naveen Patnaik and request him for a total prohibition of liqour in the state. However, after their 11-day journey, they were not allowed to meet the CM by the local police here.

Heartbroken, the couple has decided to write to Prime Minister Narendra Modi for his support for prohibition of liqour in Odisha. On June 14, the couple, Goura Chandra Bhosagar (45) and his wife Shibani (35), along with their two-year-old daughter from Behera Gaon under Khuntapalli panchayat in the district embarked on their journey after they were allegedly harassed by the local excise officials at their village.

Shibani, a former Naib Sarpanch, had been supporting anti-liquor campaigns in her area owing which her house was raided in the first week of this month on charges of selling liquor at their house. Besides, she was harassed and her house vandalised when Gour was away. Disturbed by the development, the couple went up to district collector and superintendent of police (SP) to register their grievances. However, their grievance allegedly fell on deaf ears.

The unwavering couple decided to take this matter to CM’s doorsteps seeking his intervention. On Saturday evening, the couple reached the Bhubaneswar, where they received enormous support from anti-liquor activists. Their perseverance paid off as they were guided to meet excise minister Shashi Bhusan Behera who promised them to look into the
matter.

The couple then went towards Naveen Niwas, the chief minister’s residence, to put forth their grievance and submit a memorandum to Mr Patnaik seeking ban on manufacture and sale of liquor in the state. However, the local Airfield Police didn’t let them meet the CM.