Under the Kisan Sandesh Yatra public representatives will hear farmers’ grievances and apprise them about the welfare schemes. 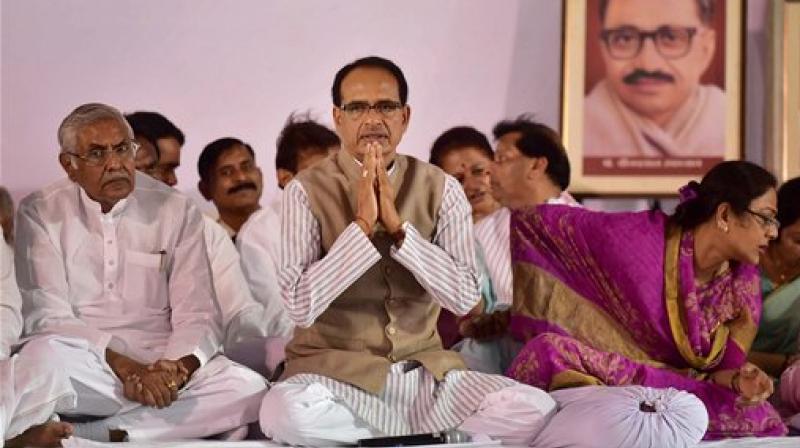 Madhya Pradesh Chief Minister Shivraj Singh Chouhan had gone for a fast after farmers were killed in the state in police firing (Photo: PTI)

Bhopal: The ruling BJP in Madhya Pradesh is launching a farmer outreach programme from Tuesday, weeks after the state was hit by a widespread agitation by cultivators.

The saffron outfit, which faces assembly polls in late 2018, is starting a Kisan Sandesh Yatra under which its public representatives will meet farmers and listen to their grievances.

"Our public representatives are going to go in the midst of farmers from tomorrow under a 10-day long Kisan Sandesh Yatra. We are going to hear their grievances and apprise them about the welfare schemes being run by the state and central governments," Madhya Pradesh BJP general secretary V D Sharma said.

"We are going to dispel misconceptions spread among farmers by vested interest," he said.

The basic aim of the programme is to connect farmers with the government's policies and remove any doubt they have about the state administration, Sharma added.

The BJP leader maintained the yatra was planned much before the agitation which started in the first week of June and later turn violent.

Chief Minister Shivraj Singh Chouhan was a `kisan putra' (the son of a farmer) and was very sensitive to problems of cultivator. The BJP government is working very hard to double the income of farmers by 2022, a goal set by Prime Minister Narendra Modi, Sharma said.

Madhya Pradesh witnessed farmer unrest in the first fortnight of June. The stir made headlines when police fired at farmers, killing five of them in Mandsaur district on June 6.

The agitation was launched to demand a loan waiver and better prices for farm products. Since the unrest, more than 20 farmers, most of them debt-ridden, have committed suicide in the state.