Mr Yeddyurappa said he would not comment on the Congress as it was already out to “finish” the JD(S). 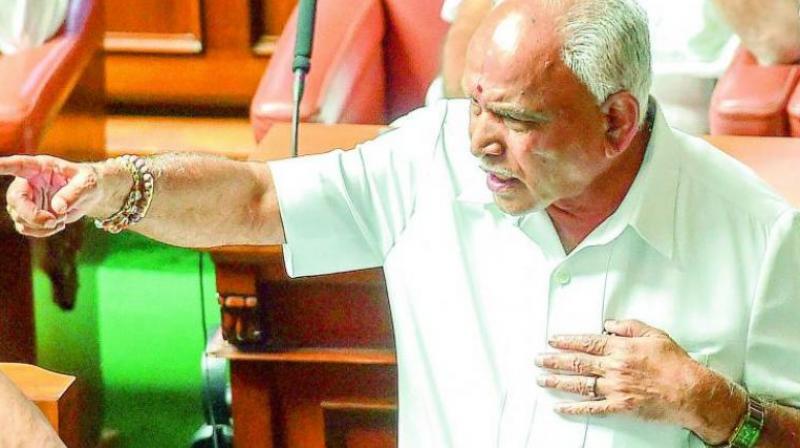 Bengaluru: Leader of the Opposition in the Karnataka Assembly B.S. Yeddyurappa announced on Friday that his party would call for a statewide bandh on Monday in case chief minister H.D. Kumaraswamy dithers on waiver of crops loans released to farmers by public sector banks and co-operative banks.

He told the media soon after leading a walkout by legislators of his party that the delay in writing off loans by the coalition government mirrored its apathy towards farmers.

“We have decided to call for Karnataka bandh. And since elections will be held in R.R. Nagar Assembly constituency on Monday, we decided not to support the bandh in Bengaluru city. We have called upon all private transport operators to suspend trasnport service for a day to support the cause of farmers,” he added.

Mr Yeddyurappa, who was recognised as leader of Opposition by Speaker K.R. Ramesh Kumar before the trust vote, charged that chief minister H.D. Kumaraswamy had promised to waive farm loans worth `53,000 crore, including those from public sector banks. “It was you (Mr Kumaraswamy) who promised waiving farm loans within 24 hours (after assuming office). The farmers will not be ready to buy your stories that you head a coalition government and it has its own compulsions. You have to announce it in this special session itself. Else, we will prepare an action plan to launch our agitation across the state,” he said.

Mr Yeddyurappa said he would not comment on the Congress as it was already out to “finish” the JD(S).

He, however, said the BJP’s struggle was against the “anti-farmer, anti-people and corrupt government of Kumaraswamy.”