India   All India  26 May 2018  Congress leaders put off Delhi visit
India, All India

To wait for JD-S approval on portfolios; party likely to keep 5-7 berths empty. 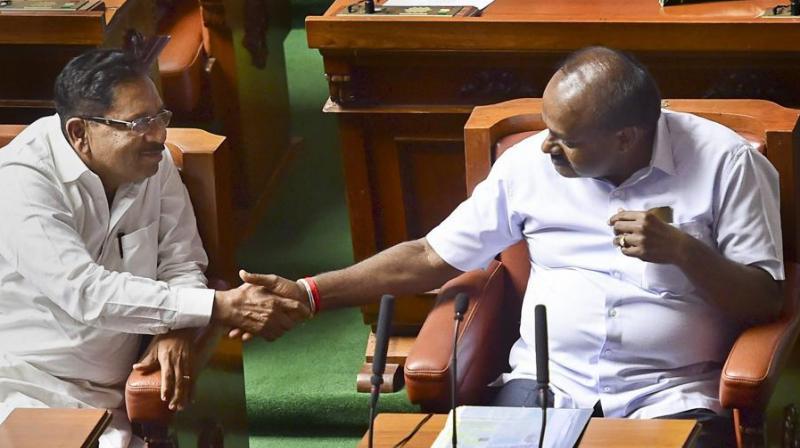 Karnataka chief minister H.D. Kumaraswamy and his deputy G. Parameshwara greet each other after thier coalition government won the trust vote by voice vote at Vidhana Soudha in Bengaluru. (Photo: PTI)

Bengaluru: In a sign that negotiations over Cabinet seats could pose the first challenge to the smooth functioning of the Kumaraswamy government, senior leaders of the Congress, who were expected to fly to Delhi Friday night in response to summons from Congress president Rahul Gandhi are now likely to go there only after getting a clear picture about the portfolios, and some say, clearance from alliance partner JD(S) supremo H.D. Deve Gowda, according to party sources.

Speaking to this newspaper, a senior Congress leader said, “The party is not yet in a position to say it has cornered so many portfolios as they will have to be finalised by the JD(S) and this cannot happen without the approval of its party supremo, H.D. Deve Gowda. So the Congress leaders in the state may open a backroom channel with Mr Gowda to finalise the portfolios. Only after, he gives the green signal can they go to New Delhi to formally finalise the list of ministers.”

Coalition partners, Janata Dal(S) and the Congress , which are both eyeing plum portfolios in the Cabinet, reportedly  held a meeting Friday night to discuss the issue.

The Congress, which is all set to get 22 ministries in the Cabinet, including the post of deputy chief minister, is likely to keep five to seven berths empty as part of a carrot and stick policy to counter rebellion within the party in days to come, going by sources.

“These 10 leaders are almost certain as they satisfy the caste matrix, which is closely followed by the Congress party,”  said a party insider.