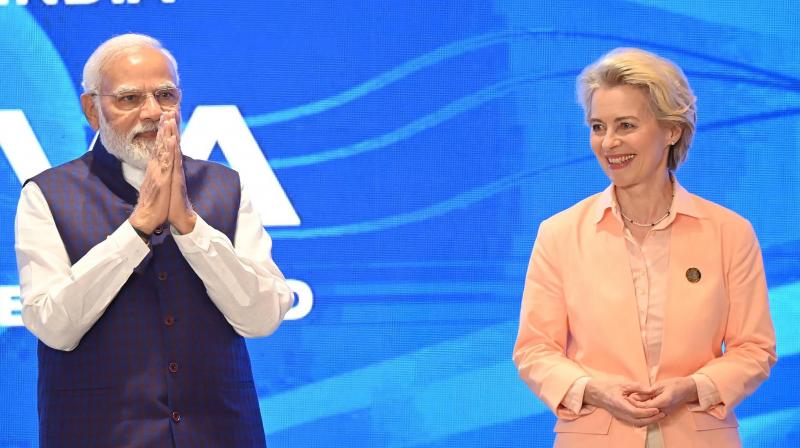 New Delhi: On the second day of her two-day India visit, European Commission president Ursula von der Leyen held talks with Prime Minister Narendra Modi, when both leaders agreed to establish an EU-India Trade and Technology Council (TTC) to ramp up trade and security ties, even as the EC president later in the evening blasted Russia for its “severe violation of law” in the invasion of Ukraine, adding this Russian “aggression” goes against the core security of Europe which will make sure this aggression becomes a “strategic failure”.

Speaking about her visit to the Ukrainian town of Bucha, where she saw the mass graves, she added the “core principles that underpin peace and security are at stake in both Asia and Europe”, adding that the economic sanctions imposed by the West on Russia “aren’t a standalone solution”.

The EC chief, who praised India as democracy’s “largest home”, further pointed out that Russia and China have forged an “unrestrained pact” with “no limits and no forbidden areas of cooperation”, while describing China as a “negotiation partner, economic competitor and systemic rival” of the EU, but added that Europe would encourage China “to play its part in a peaceful Indo-Pacific region”.

In the bilateral talks earlier in the day, both leaders urged an immediate end to the violence in Ukraine, with Mr Modi “stressing the importance of giving peace a chance, and the need to return to dialogue and diplomacy as the only way to achieve peace”. The two also discussed bilateral cooperation in the Indo-Pacific region and agreed to resume negotiations for proposed Free Trade Agreement (FTA), which needs to be negotiated by both sides. Both also agreed the two sides “would start talks on an Investment Protection Agreement and an Agreement on Geographical Indications”, for which the first round of negotiations will take place in June. Jointly combating climate change was also discussed, with Mr Modi inviting the EU’s increased participation in green energy in India, with its focus on green hydrogen.

Both sides described the TTC as a “strategic coordination mechanism (that) will allow both partners to tackle challenges at the nexus of trade, trusted technology and security”, to “provide the political steer and the necessary structure to operationalise political decisions, coordinate technical work, and report to the political level to ensure implementation and follow-up in areas that are important for the sustainable progress of the Indian and European economies”.

Ms Von der Leyen said the EU and India would “strengthen their partnership and deepen bilateral cooperation with a focus on upholding the rules-based global order, supporting economic recovery, fighting climate change and charting the digital transition”. She added: “Today, we are taking steps to deepen our strategic ties with India -- on trade, trusted-technology and security, notably in respect of challenges posed by rival governance models. This will help us diversify and secure our supply chains, boost economic opportunities for our businesses, and bring significant benefits to our citizens.”

Soon after the talks with Mr Modi on Monday morning, Ms Von der Leyen said: “I am thinking of three main topics -- trade, technology and security. That is why I am pleased that today Prime Minister Modi and I have agreed to establish an EU-India Trade and Technology Council. The EU has only one TTC so far -- with the US, and I think it is telling that we now establish the second one with India. Also, because India is technologically a powerhouse, and in the trade sector we need to unleash an enormous amount of untapped potential.” She also referred to the cooperation with India in tackling climate change.

Addressing the Raisina Dialogue conference in the in the presence of Mr Modi later in the evening, the EC president, asking whether the principle of “right of might” would dominate the world or else the “rule of law”, said “(Russian President Vladimir) Putin’s war of choice” in Ukraine “would impact and deeply affect the Indo-Pacific region too”.

As Mr Modi listened, the EC president told the delegates at the Raisina Dialogue: “Two weeks ago, I visited Bucha, the suburb of Kyiv which was devastated by Russian troops as they withdrew from north of Ukraine. I saw with my own eyes the bodies lined up on the ground. I saw the mass graves. I listened to survivors of atrocious crimes the Kremlin’s soldiers committed. I saw the scars of bombed schools, resident houses and hospitals. These are severe violations of international law. Targeting and killing innocent civilians. Redrawing borders by force. Subjugating the will of a free people. This goes against core principles enshrined in the UN Charter.”

She also made what appeared to be a veiled reference to cash-strapped Sri Lanka, which has got huge Chinese debt, adding “investment cannot be at the cost of independence”.

She added: “In Europe, we see Russia’s aggression as a direct threat to our security. We will make sure that the unprovoked and unjustified aggression against Ukraine will be a strategic failure. This is why we are doing all we can to help Ukraine fight for its freedom. This is why we immediately imposed massive, sharp and effective sanctions. Sanctions are never a standalone solution. They are embedded in a broader strategy that has diplomatic and security elements.

And this is why we have designed the sanctions in a way to sustain them over a longer period of time. Because this gives us leverage to achieve a diplomatic solution that will bring lasting peace. And we urge all members of the international community to support our efforts for lasting peace.”

The EC president added: “This is a defining moment. Our decisions in these days will shape decades to come. Our response to Russia’s aggression today will decide the future of both the international system and the global economy. Will heinous devastation win or humanity prevail? Will the right of might dominate or the rule of law? Will there be constant conflict and struggle or a future of common prosperity and lasting peace?

What happens in Ukraine will have an impact on the Indo-Pacific region. It already has. Countries battered by two years of the  Covid-19 pandemic must deal now with rising prices for grain, energy and fertilisers as a direct result of Putin’s war of choice. Thus, the outcome of the war will not only determine the future of Europe but also deeply affect the Indo-Pacific region and the rest of the world. For the Indo-Pacific region, it is as important as for Europe that borders are respected and that spheres of influence are rejected.”

Praising India’s democracy, the EC chief said: “Every five years, when Indians cast their vote in parliamentary elections, the world watches with admiration as the world’s largest democracy charts its future path. Because the outcome of decisions made by 1.3 billion people resonates around the globe. This is especially true for Europe. As vibrant democracies, India and the European Union share fundamental values and common interests. Together, we believe in each country’s right to determine its own destiny.

Together, we believe in the rule of law and fundamental rights. And together, we believe that it is democracy that best delivers for citizens. So, despite our geographic distance and despite the different languages we speak -- when we look at each other, we do not meet as strangers but as close friends. Democracy was born more than 2,000 years ago in Europe. But today, its largest home is India.”

In a statement, New Delhi said: “The leaders had an extensive discussion on climate related issues, including on possibilities of collaboration between India and the EU in areas like Green Hydrogen. In addition, several geopolitical issues of topical importance were discussed during the meeting, including the situation in Ukraine and developments in the Indo-Pacific region.”