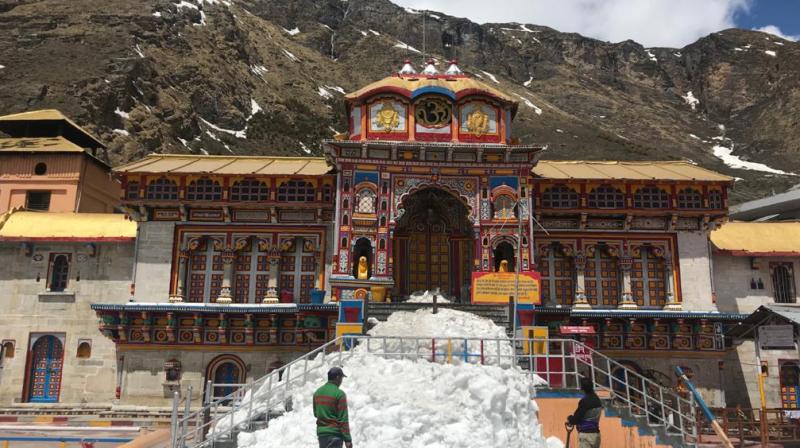 The Badrinath shrine in Uttarakhand

Hyderabad: Around this time every year, Bheema Shanker Ling travels to Hyderabad from Nanded, where he lives, and boards a flight to Dehradun in Uttarakhand where his presence is a must. Ditto is the case with Ishwar Prasad Namboodiri of Kerala, who cannot afford to remain absent for the most important work of his life.

But this year was different. Both men were scheduled to fly separately and reach Uttarakhand around April 20, but all flights are cancelled due to the lockdown.

But that did not stop them. Bheem Shanker Ling, the Rawal or head priest of the Himalayan shrine of Kedarnath, and Prasad Namboodiri, the head priest of Badrinath dham, travelled by road, covering distances of 1,800 km and 2,800 km respectively, to ensure that traditions are kept alive.

The doors of Kedarnath and Badrinath will open on April 29 and May 15 respectively amid rituals. The Char Dham yatra has been suspended during the lockdown period. Lakhs of people visit the shrines every year and people from South India form the major chunk of devotees.

“There is 18 feet of snow in Kedarnath at the moment and a team of 25 people are clearing it. Though the yatra is suspended, the portals of Kedarnath will open as scheduled at 6.10 am on April 29. After taking necessary permissions, I started from Nanded in a car on April 17 and reached Ukhimath on April 19,” Shanker Ling told Deccan Chronicle from Ukhimath, which is the winter seat of the deity.

The moment he arrived in the Himalayan state, he was quarantined and underwent tests for the coronavirus, as was made mandatory by the Uttarakhand state government. “I have tested negative but I'm still in quarantine,” he said.

According to him, the Uttarakhand government has allowed 16 people which includes priests and cooks, who will stay in Kedarnath until it closes by October end or first week of November, to travel. Situated at a height of 3,583 m above sea level, the region remains buried under a thick blanket of snow during the winter.

“All of them have been instructed to maintain social distance. The rituals begin today (April 25) and the doli (carrying the deity) will reach Kedarnath on April 28 and the portals open the next day. Being in quarantine, I might not go and will authorise another priest. I will make it to Kedarnath immediately after the quarantine period comes to an end on May 2,'' said Shanker Ling, who originally belongs to Karnataka. He has been the head priest for 20 years.

His only regret is that every year, the doli or procession is taken by road till Kedarnath and thousands of people turn up to witness the occasion. This year, it is being taken in a vehicle to avoid crowds.

He says that there would be special prayers to eradicate Coronavirus when the portals open on April 29.

Similar is the case with Ishwar Prasad Namboodri. “After his arrival in Rishikesh on April 21, he has been in quarantine. The portals of Badrinath will open on May 15 and he will reach there by then. He too has tested negative,'' said Mohan Prasad Thapliyal, former president of the Badrinath-Kedarnath Temple committee. He informed that since the head priests for the remaining two dhams — Gangotri and Yamunotri — are locals and there was no problem on that front.

This will be the first time that 'yatra' has been suspended due to the pandemic and it is believed that the footfall this year could be the lowest ever.