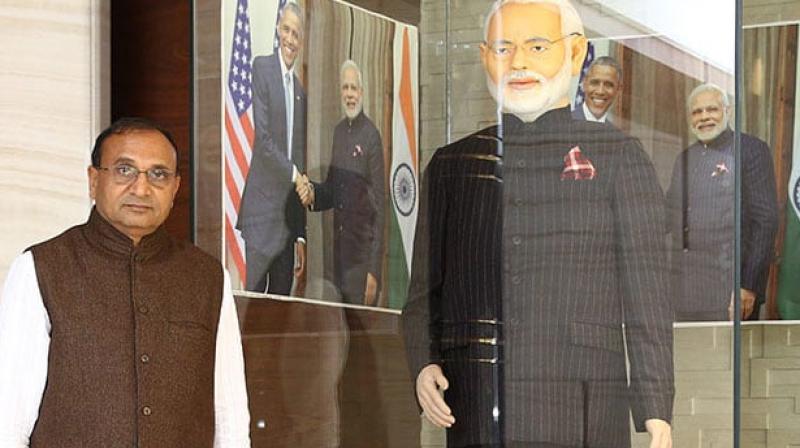 Laljibhai Patel, chairman of Dharmanandan Diamonds Pvt Ltd, had hit the headlines in 2015 when he bought Modi's much-famed pinstripe suit for Rs. 4.31 crore in a public auction. (Photo: Guinnessworlrecords.com)

Surat: A prominent diamond merchant of Surat, who had bought Prime Minister Narendra Modi's pinstripe suit in an auction in 2015, has been allegedly duped of Rs. 1 crore by two brothers, the police said Friday.

Laljibhai Patel, chairman of Dharmanandan Diamonds Pvt Ltd, had hit the headlines in 2015 when he bought Modi's much-famed pinstripe suit for Rs. 4.31 crore in a public auction.

Now, it has been alleged that two brothers - Himmat and Vijay Koshia - had cheated Mr Patel's firm by not making payment towards rough diamonds they had taken on credit last year.

A complaint in this regard was registered at the Katargam police station of Surat on April 22 by the manager of Dharmanandan Diamonds, Kamlesh Kevadiya, the police said.

As per the FIR, the Koshia brothers had won the trust of the company and allegedly taken rough diamonds weighing 1,500 carats and worth Rs. 1 crore on credit in October 2018.

In his complaint, Mr Kevadiya claimed the duo, who are on the run now, had promised to make the payment in 120 days, which is a norm in the diamond industry.

However, when Mr Kevadiya called them up for the payment after the lapse of credit period, their mobile phones were found to be switched off, the FIR said.

According to police inspector Z N Ghasura, the Koshia brothers had cheated other diamond traders, too, in the past.

"We have taken the complaint and started our investigation. We have learned that Koshia brothers, who are yet to be arrested, had cheated other firms in the past and a complaint against them was registered at the Varachha police station some time back," said Ghasura.