The man claimed to be a relative of the former court staffer who has levelled sexual harassment allegations against the Chief Justice. 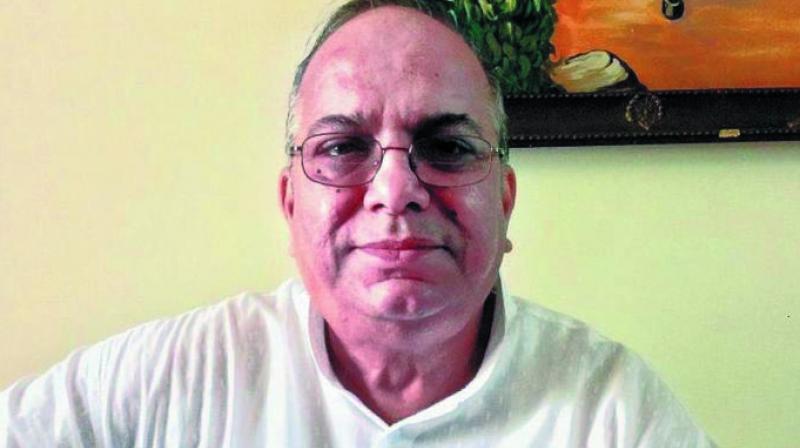 New Delhi: The Supreme Court on Thursday appointed a retired top court judge, Justice A.K. Patnaik, to probe allegations that disgruntled employees had ganged up together to “frame” Chief Justice of India Ranjan Gogoi on the false charge of sexual harassment after their dismissal from service.

A special bench of Justices Arun Mishra, Rohinton Nariman and Deepak Gupta passed this order in the suo motu proceedings relating to the “matter of great public importance touching upon the independence of the judiciary” after the charges levelled by a former woman employee of the court against the CJI.

In its order, the bench said considering the affidavits filed by Mr Utsav Singh Bains, an advocate, that there was an attempt to “fix” the CJI, “we appoint Justice A.K. Patnaik, a retired judge of this court, to hold an inquiry into the allegations made in the affidavits. However, at the same time, we make it clear that this inquiry shall not be with respect to the alleged misbehaviour involving the Chief Justice of India. This is with respect to the content of the affidavits, whether the affidavits are correct or not.” The bench also reiterated that the outcome of the inquiry shall not affect the in-house procedure/inquiry pending on the administrative side in any manner whatsoever. The bench said that it is appointing Justice Patnaik (Retd), “we request the director of the Central Bureau of Investigation, the director of the Intelligence Bureau and the commissioner of police, Delhi, to cooperate with the honourable judge as and when their services are required at any point of time for the purpose of investigation of the matter... We leave it to the honourable judge to take the assistance of whosoever else His Lordship desires”. The bench asked Justice Patnaik to submit a report to this court on the basis of the inquiry as to the allegations mentioned in the affidavits and directed these affidavits be transmitted to Justice Patnaik along with the other materials.

Earlier in the day, Justice Arun Mishra voiced concern over attempts to “manage” the Supreme Court by money and muscle power, and said there were rich and powerful people who thought they could bludgeon and blackmail the court into submission, but little did they know that they were playing with fire.

Justice Mishra made these oral observations in response to an affidavit filed by lawyer Utsav Singh Bains claiming that he had proof of a powerful lobby of fixers, disgruntled employees and corporate figures at work to frame CJI Ranjan Gogoi with the sexual harassment charge.

Mr Bains said he was approached by a person called “Ajay”, who enticed him with money. The man claimed to be a relative of the former court staffer who has levelled sexual harassment allegations against the Chief Justice.

Justice Mishra said: “The Supreme Court cannot be run by money power or political power. When somebody tries to clean up the system, he is killed or maligned. This will stop. The way this institution is being treated for the last three to four years is as if this institution is going to die. The people of this country should know the truth. Do the powerful of this country think they can run this country? We want to send a clear message to influential people with money and political power that they cannot interfere in Supreme Court proceedings and there cannot be any match-fixing in the judicial system.”

Expressing his anguish, Justice Mishra said: “This is the court made by the likes of Fali Nariman, Nani Palkhiwala and K. Parasaran... But every other day we hear of bench-fixing, every day wrong practices are made in the court... Whenever we start hearing a big case, letters are written. Whenever big cases or big persons are involved, this happens in this court... People are trying to (influence) this court, its registry with money power... So many things are going on.”

Earlier, when the hearing began, advocate Utsav Bains handed over to the court more material in a sealed cover. Claiming privilege, he refused to divulge certain communications. The bench rejected the claim of privilege and asked him to produce all communications and materials with him for the purpose of inquiry.

As senior advocate Indira Jaising voiced apprehensions about the parallel probe, the bench made it clear that it will not go into the allegations of sexual harassment raised by the former Supreme Court staffer. Justice Misrha said: “Our job is to find out if somebody approached Utsav Bains to file a false case; whether they are two former Supreme employees or others; whether there are fixers involved; whether a conspiracy was hatched after bench-fixing attempt failed.”

Ms Jaising asked the bench to “probe the credentials of this person Utsav Bains”. She said: “My Lords have to see if he has come to the court with clean hands,” she said. The bench pointed out that the advocate had named Tapan Kumar Chakraborty, Manav Sharma and others, and also alleged they have asserted they could “fix” the bench of the judges. “This is a very serious aspect of the affidavit filed by Mr Utsav Singh Bains, which should be probed,” it said. The bench directed the matter to be listed after submission of the report by Justice Patnaik.