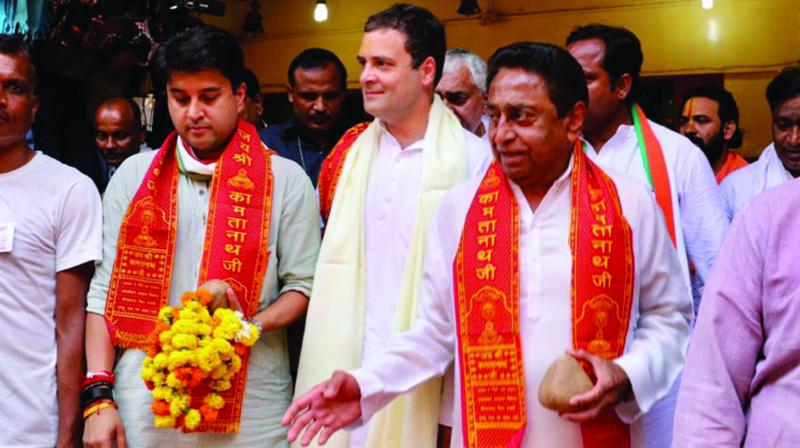 A file photo of Congress leaders maintaining a facade of bonhomie and camaraderie.

Bhopal: Factionalism in the Congress in Madhya Pradesh has triggered a battle of one-upmanship among the leaders in the party, threatening to upset its applecart in the four-phase Lok Sabha elections in the state.

The rivalry among them has reached flash point with the factional leaders launching a “fight-to-finish” war against each other, landing the party in a fix.

“It has become a question of political survival for some of the feuding leaders as the game of one-upmanship has turned into a no-holds-barred war,” a senior Congress leader told this newspaper here on Thursday requesting anonymity.

Congress veteran Digvijay Singh has been pushed to the contest in Bhopal Lok Sabha constituency, making the polls a matter of survival for him, thanks to the factionalism in the party.

“Mr Singh knows full well that the election will make or mar his political career. It may raise a question mark on his career if he loses the polls because age is not on his side to stage a comeback,” one of close aides of Mr Singh, who turned 73 on February 28, said unwilling to be quoted.

It appeared he might be fighting the biggest battle in his career as he was going to face the firebrand saffron leader Sadhvi Pragyan Singh Thakur, seen as a Hindutva face in Bhopal, considered the RSS-stronghold.

Uncharacteristically, Mr Singh has been making temple runs for the past several weeks in the run-up to the polls, which has clearly indicated how seriously he has taken the election.

Incidentally, the announcement by the party to field him in Bhopal came barely 24 hours after an incident involving Mr Singh, which had caused acute embarrassment to Madhya Pradesh chief minister Kamal Nath.

A fortnight ago, Mr Singh was seen talking to Mr Nath over his cell phone with the speaker on while being in the company of some Congress leaders.

Mr Nath had reportedly felt embarrassed when he learnt from Mr Singh himself that the speaker of the cell phone was on.

Twenty-four hours later, the chief minister asked Mr Singh to choose the “toughest” seat to contest from in the upcoming LS elections in MP and subsequently thrust the Bhopal constituency on him, denying him the luxury of seeking elections from Rajgarh, considered Mr Singh’s comfort zone.

Mr Singh’s loyalists however saw in the “unexpected development” the machinations of the combine of Mr Nath and AICC general secretary Jyotiraditya Scindia.

“Both Mr Nath and Mr Scindia have an axe to grind against Mr Singh. While Mr Singh's growing influence in the state administration has caused discomfiture to Mr Nath, Mr Scindia saw a design by Mr Singh to cut him down to size in the party in MP,” said a senior Congress leader who belonged to none of the camps of factional leaders.

Mr Scindia’s followers have particularly seen Mr Singh’s hand in the party leadership giving him the assignment of leading elections for Congress in west Uttar Pradesh in the 2019 general elections to keep him out of the state during the period.

A spokesman of Congress here however dismissed talks of factionalism in the party, claiming that Mr Singh has volunteered to take responsibility of helping the Congress snatch Bhopal from the saffron party.