The document is a revision of the doctrine declared eight years ago — the logical product in the aftermath of the Kargil War. 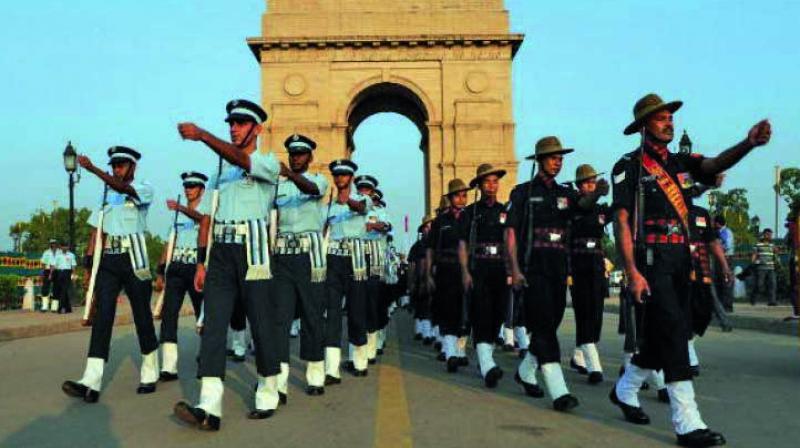 India will have three Army commands, three Air Force commands and the Navy’s Eastern Command, making it a total of seven operational commands with diverse mandates.

New Delhi: In a major step to synergise India’s military forces and with “jointness” and “integration” being the buzzwords among the leading military nations of the world, a new joint doctrine was adopted on Tuesday in the presence of the chiefs of the three armed forces, besides the chief of the Integrated Defence Staff.

The document was released by chairman of the Chiefs Of Staff Committee and Navy Chief Admiral Sunil Lanba in presence of Army Chief Gen. Bipin Rawat and IAF Chief B.S. Dhanoa.

The doctrine will lay down a broad framework of concepts and principles for the conduct of strategic, operational and tactical level operations across land, air, sea, space and cyber-space.

The change is indicative of a preference for the Theatre Command system of war where all branches and wings of the military operate under a single unified command as also a move towards the long-felt need for a chief of defence staff — a single point military official to direct war strategy and effort.

While India’s neighbours China and Pakistan already have Theatre Command doctrines in place, certain recent developments in China’s military structure may have hastened the changes and it was just a question of time before India too adopted the changes.

Just to illustrate the case in point, in case of a possible war scenario with China, India will have to confront the newly-formed Western Theatre Command on land and the Southern Theatre command at sea. In contrast, India will have three Army commands, three Air Force commands, and the Navy’s Eastern Command, making it a total of seven operational commands with diverse mandates versus China’s two. At the same time, the Army, IAF and Navy commands would report to their respective chiefs besides the logistical issues of operational commands headquartered at different places.

A defence ministry release stated: “The joint doctrine of the Indian armed forces will serve as a cornerstone document for application of military power in a synergised manner leading to enhanced efficiency, optimum utilisation of resources and financial savings.”

The document listed a range of security threats facing the country, including transnational threats, “proxy war” in Jammu and Kashmir and left-wing extremism in various parts of the country and indicated that “surgical strikes” could be a key feature in counter-terror operations.

The joint doctrine proposes joint training of personnel, unified command and control structure besides pushing for a tri-service approach for modernisation of the three forces.

The document is a revision of the doctrine declared eight years ago — the logical product in the aftermath of the Kargil War.

The doctrine also talked about the steps initiated for establishment of the “Defence Cyber Agency”, “Defence Space Agency” and “Special Operations Division”.

Significantly, the document states: “The fragile security environment in the Af-Pak region and neighbouring support to proxy war in Jammu & Kashmir, lends a possibility of it being a conduit for eastward spread of fundamentalist and radical ideologies”.

It said special forces operations will be conducted by specially selected troops of the Army, Navy and Air Force who are trained, equipped and organised to operate in hostile territory in all dimensions - land, air and sea.

It said following approval by political leadership, decisions on joint military objective will be taken by COSC.

“The Joint Operations Committee (JOCOM) is the integrated structure at strategic level under the COSC to conduct and plan operations,” it said.

The doctrine said coordination with relevant agencies like RAW, Intelligence Bureau and Intelligence organisations of the para-military forces as part of the Joint Intelligence Committee under the National Security Adviser is an imperative to the intelligence structure.