20 Muslims convert to Hinduism in Faizabad

The conversion ceremony was done as per Vedic norms after which they were declared Hindus. 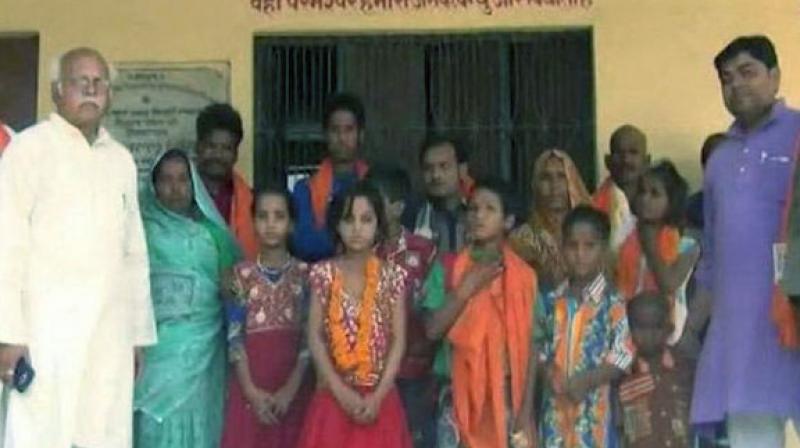 About 20 Muslims in Faizabad district have converted to Hinduism at a ceremony held at Arya Samaj temple.

Lucknow: About 20 Muslims in Faizabad district have converted to Hinduism at a ceremony held at Arya Samaj temple on Monday evening.

RSS leader Kailash Chand Srinaivastav educated the bunch of people about Hinduism and its beliefs. Mr Srivastava said that all the Muslims families belong to the “Nat” community and had converted to Islam about two or three decades ago.

“This is homecoming or ‘ghar wapsi’ for them. They have not been given any promises and nor was any pressure exerted upon them. They had been meeting me since the past few weeks to discuss various aspects of Hinduism and finally, they said that they wanted to return to their parent religion,” he said.

The conversion ceremony was done as per Vedic norms after which they were declared Hindus. All of them were given Hindu names of their choice.

The families that have covered to Hinduism belong to Alapur area in Ambedkar Nagar and their identities have been kept a secret for security reasons.

“For the next few days, we have asked them not to disclose their Hindu identities for security reasons,” the RSS leader said.

Arya Samaj temple priest Sharmamitra Sharma said that he had convinced himself that the families were not under any kind of pressure before carrying out the conversion ceremony.

The male members of the families said that circumstances had forced their ancestors to convert to Islam years ago but now they were returning to Hinduism. The local administration, meanwhile, said it was not aware of any such incident and nor had it received any information in this regard.