India   All India  26 Mar 2018  The challenge of halving road accident deaths and injuries
India, All India

The challenge of halving road accident deaths and injuries

An analysis of the accident and mortality data reveals that the number of accidents is very high in the context of highways. 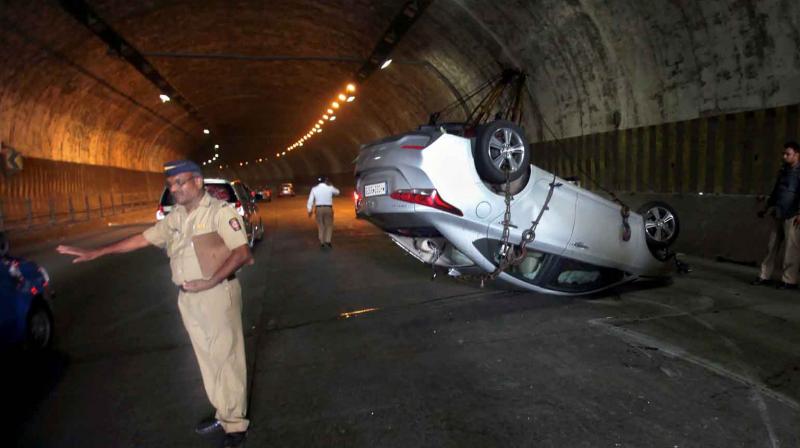 A car accident on the city’s busy Eastern freeway tunnel, near the suburban area of Chembur, in Mumbai. (Photo: PTI)

Road accidents pose exceptionally high risks in India to the safety of people. While road accidents did not increase significantly during the first 15 years of this century at the world level, in India from 2001 to 2015 the number of road accident fatalities increased by about 75 per cent during this period.

It is in the context of this increasing distress caused by road accidents that the Sustainable Development Goal of halving the deaths and injuries caused by road traffic accidents appears to be a very challenging one in India. This may appear to be a difficult goal just now but it is certainly not an impossible one. There are several possibilities of significantly reducing road accidents and reducing road accident fatalities. In particular if this task can be taken up in a campaign mode with close and keen involvement of people then very encouraging results can be achieved within a decade or so.

To begin with, we should at least get the basic statistics right. While the data relating to road traffic accident mortality is known to be reasonably close to reality, the data on road traffic accident injuries is widely admitted to be a huge underestimate. It is important to first correct the database before we can speak in terms of reliable targets and achievements.

In 2010 the United Nations General Assembly adopted a resolution calling for a Decade of Action for Road Safety 2011-20. The Global Status Report on Road Safety (the GSRRS) noted that in the three years preceding the start of this decade nearly 88 countries reduced the number of road accidents while 87 countries experienced an increase of road accident mortality. India is among those of the more worrying examples where road accident mortality increased significantly from 80,900 in 2001 to 141,526 in 2014.

The GSRRS has identified five key risk factors for legislation on road safety — speed, drink driving, motorcycle helmets, seat belts and child restraints. Very few countries have enacted laws covering all these five factors and India’s performance has also not been good, particularly when one looks not just at the enactment of laws but also at their implementation.

Some studies have revealed that the role of drunk driving in causing accidents can be quite high in India. In a hospital study in Delhi, 29 per cent of the riders of motorised two-wheelers admitted to alcohol consumption before the crash. In Bengaluru another hospital-based study revealed that alcohol was involved in 22 per cent of night time crashes, and that 35 per cent of randomly checked drivers on the road at night were under the influence of alcohol. Hence taking strong steps to curb drink driving can play an important role in reducing road accidents.

The use of seat belts and motorised two-wheeler helmets is reasonably well implemented in several big cities but not so in several smaller towns and rural areas. Apart from implementing this better, there is an urgent need for making roads safer for pedestrians and cyclists. They along with cycle rickshaw pullers and handcart pullers are among the most vulnerable users of roads in India. The GSRRs has pointed out that road infrastructure is mainly constructed with the needs of motorists in mind, but 49 per cent of all road traffic deaths occur among pedestrians, cyclists and motorcyclists.

It is also extremely important to implement vehicle safety standards. It is well known that highly unsafe cars have been marketed in India as well as many other developing countries. Similarly safety standards are violated in the context of several other kinds of vehicles as well.

Several experts have pointed out that even modest speed reduction can contribute much to reducing the number of accidents as well as the severity of accidents.

A neglected factor is that quite a significant number of accidents are caused by sleepiness. This can be an important factor when drivers are overworked and this is true of many drivers, particularly cab drivers in big cities. Many night time highway drivers suffer from sleepiness and this can be very risky.

An increasingly important cause of accidents is the use of mobile phones while driving. If not checked at the right time this can endanger road safety very rapidly in the near future and so it is important to take strict action in this context now.

Irregularities and corruption in issuing driver licenses is another important aspect of the factors causing high rate of road accidents and effective action is badly needed to check this corruption, which is responsible for taking so many human lives.

Action is needed on all these important fronts. This means enacting laws and rules plus also ensuring their proper implementation, providing adequate funds for enough personnel, necessary equipments and research support.

There have been examples from several countries, including Thailand, Denmark and China, where significant progress in reducing accident mortalities could be achieved in relatively short periods. Efforts should be made to learn from such success stories and try to see what can be replicated in other areas for achieving the goal of halving the number of road accident fatalities.

Apart from reducing road traffic accidents there is much that can be achieved in terms of reducing the mortality caused by such accidents. Eminent doctors have pointed out that it is possible to reduce fatalities by at least 50 per cent if accident victims are admitted to a hospital within the first hour after the accident. Unfortunately such timely care is available only to a relatively small minority of road crash victims in India.

A comprehensive effort involving simultaneous efforts on all these fronts along with involving citizens at various levels to create a strong public campaign can help create suitable conditions for halving road traffic accident deaths and injuries.