Bhagwant Mann resigned as its Punjab unit chief on March 17 in protest against Kejriwal's apology to Bikram Singh Majithia in a defamation case. 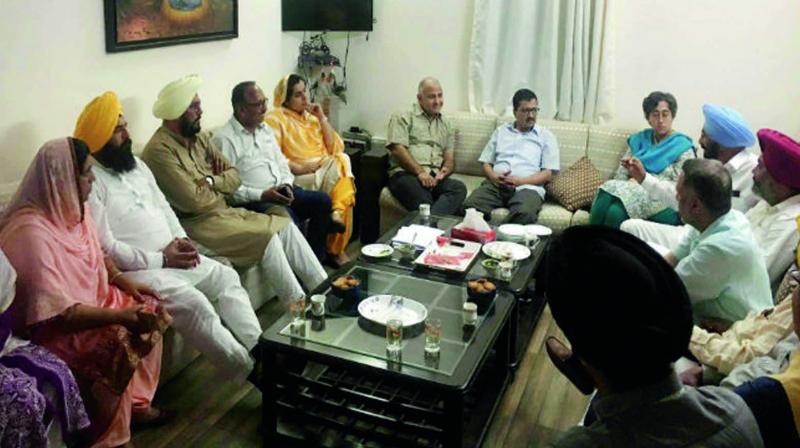 At least 10 AAP legislators from Punjab met Arvind Kejriwal in Delhi on March 18 to understand the circumstances under which he apologised to Akali Dal leader Bikram Singh Majithia in the defamation case.

AAP convenor Arvind Kejriwal has averted a split in the party’s Punjab unit, for now, but it is not going to be easy for him to prevent its disgruntled MLAs in the state from breaking away or joining other parties.

Chandigarh: The AAP in Punjab in the throes of a crisis with its state unit chief and MP Bhagwant Mann resigning in protest against the apology by the AAP convenor Arvind Kejriwal to former Punjab minister and Akali leader Bikram Singh Majithia, who had filed a defamation case against the Delhi chief minister for charging him of being involved in drug trade.

The new outfit is almost vertically split in the state where it made its Assembly debut by winning 20 seats last March. Punjab is the only state, other than Delhi, where the new outfit has legislators but the latest crisis in the party is threatening to dent its image in the Congress-ruled state.

Mr Kejriwal’s apology to Mr Majithia, which came without consulting the state unit, had caused huge embarrassment to party MLAs and workers in Punjab as it reflected a step down from the earlier stand taken by the AAP on the drugs menace getting political patronage in the state.

Although some of the AAP MLAs went to Delhi for a meeting with Mr Kejriwal on March 18 for understanding the reasons why he went ahead with his apology to the Akali leader, there were others who refused to listen to the AAP convenor's excuse.

Mr Kejriwal has claimed that he has averted a split within the Punjab unit after explaining his position to the legislators during a meeting with them last week.

But the crisis does not seem to be over completely as some party voices are still pitching for detachment from the Delhi-controlled set up. Others are saying to wait and watch.

MLA from Kotkapura Kultar Singh Sandhwan opened the front against Leader of the Opposition in the Punjab Assembly and his party colleague Sukhpal Singh Khaira for what he termed as an attempt to split the party by putting pressure on the legislators and bringing a resolution in a meeting in Chandigarh.

Mr Sandhwan said that the AAP should take action against Mr Khaira who violated the party’s code of discipline by making attempts to create a new outfit. He lashed out at Mr Khaira and other MLAs claiming that they won election in the name of the party's national convener Arvind Kejriwal but were not trying to challenge his authority.

If Mr Khaira wants to create a new party, he must vacate the MLA’s seat and fight elections, said Mr Sandhwan.

“We attended the meeting at New Delhi on March 18 because we wanted to know under what circumstances Mr Kejriwal apologised to Mr Majithia in the defamation case,” said Mr Sandhwan, who went Delhi to attend the party meeting.

The Congress was quick to take a dig at Mr Kejriwal for his apology. Punjab minister Navjot Singh Sidhu described Kejriwal’s apology a “murder of AAP in Punjab”.

“It is a let down to the people of Punjab. I feel Kejriwal has murdered AAP in Punjab. It is as if their existence has been wiped off. With what face will they speak against drugs in Punjab now?” asked the Congress leader.

After 10 MLAs met Mr Kejriwal in Delhi, Mr Khaira backed down and said he was open to meeting the Delhi leadership. However, he has insisted that the meeting should take place in Chandigarh.

“There is no problem in meeting, we are in the same party. There is no ego involved in this. But we would still want that they (Delhi leaders) come down here. We have had several meetings in Delhi and this time it can be here,” he said.

As the controversy continues, some AAP leaders like H.S. Phoolka are trying to find a middle path and trying to avoid a spit in the party.

Mr Phoolka has asked party MLAs in Punjab to seek “autonomy” for the state unit rather than forming a separate outfit in the best interests of the state.

Giving his views for the first time after party Mr Kejriwal’s apology to Mr Majithia on drug allegations, which pushed the state unit into a crisis, the former Leader of the Opposition in Punjab Assembly and Dakha MLA also suggested that the state unit should function like a regional party with total independence on state matters.