It is suspected that the newborn girl was abandoned by her own parents and relatives. 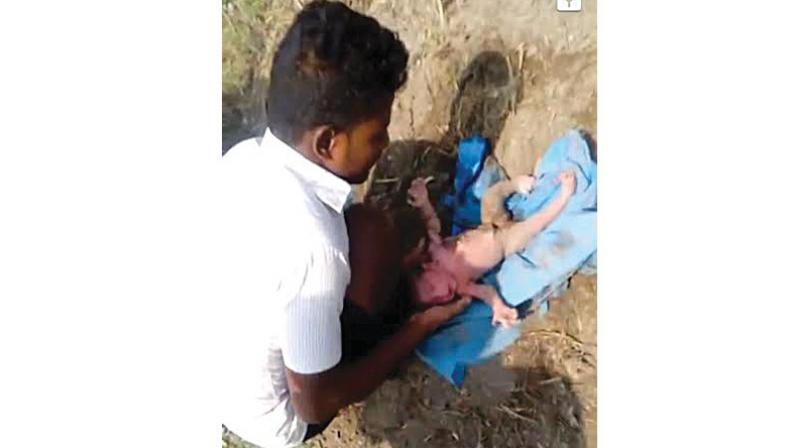 A boy comforts the rescued newborn.

Bhubaneswar: A newborn girl, buried alive allegedly by her parents, was rescued on Saturday in critical conditions by local residents at Shyamasundarpur in Odisha’s Jajpur district.

According to reports, the infant was rescued after a kid playing on the village road spotted her feet in a dump-yard and pulled her out of the ground with the help of others at around 9.30 am.

It is suspected that the newborn girl was abandoned by her own parents and relatives.

“It was a little kid who first saw the feet of the child buried under a compost dump in a field. Later, we rushed to the spot and rescued the newborn girl,” said Alok Rout, an eyewitness.

Rout said the newborn girl was buried alive while her face was covered with a piece of cloth. The child’s umbilical cord was intact, he added.

Following the incident, the tiny tot was handed over to an Asha (Accredited Social Health Activist) worker. The baby was later admitted to Dharmasala hospital in critical condition.

“A case has been lodged against the unidentified parents of the child and family members. Investigation is on to find out where the child was born and under which circumstances it was buried,” said inspector Amitabh Mohapatra of Dharmasala police station.