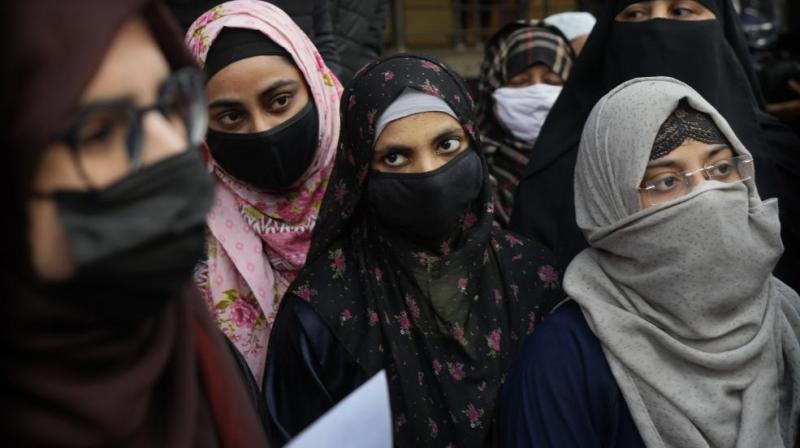 Muslim women gather to participate in a march against banning Muslim girls wearing hijab from attending classes at some schools in Karnataka, in New Delhi. (AP File Photo)

New Delhi: After 11 days of hearing, the full bench of Karnataka High Court reserved judgment on the petitions challenging the hijab ban in colleges and gave both parties to file their written submissions. The Court dismissed a PIL seeking to restrain media from chasing hijab-clad students and teachers while proceeding to their schools and colleges and from video-graphing and photographing of children and teachers near to their schools while they were removing their hijabs and burqas.

On Friday, the bench heard the rejoinder arguments by the lawyers for the petitioners.

“We have been wearing a headscarf, it is a piece of cloth covering the head, not the face, we should be permitted to use it. It is not right for college to prevent us from doing that. If it is a bonafide practice of conscience, it should be allowed under Article 25. The question of essential religious practice cannot be imported from freedom of conscience. Even hadith also says the face need not be covered but the hijab needs to be worn. This is the admitted position. Government admits this position in its reply… The Advocate General said that what is stated in the Koran though obligatory, may not be essential. That is contrary to Shayara Bano,” said Senior Advocate Yusuf Muchhala as he quoted scholar Muhammad Pickthall to argue that true Islamic tradition requires veiling of the head.

Mucchala referred to the observations in Ayodhya case that the Court should be cautious not to enter into theological discussions and should only see if the faith and the belief of the worshipper is genuinely held.

Advocate Mohammad Tahir said uniformity in the name of secularism will mean only minorities will be at loss. “Assume that lordships says school is a secular place where headscarf is not allowed. Tomorrow government will come and say this mall is a secular place and so our traditions will remain in four corners of the house,” Tahir said.

Senior Advocate Professor Ravivarma Kumar opposed the constitution of CDCs as it confers executive powers to the MLAs. He said the president of College Development Committee (CDC) will be the local MLA of the constituency. Out of the 12 members, 11 will be nominated by MLA. “This is absolute power given to the MLA; college is given over on a platter to him. The issue of entrusting a legislative member with executive power is not accepted. There is absolutely no accountability for the MLA. There is no control over him. Suppose there is misuse of funds and the Committee is responsible, who will hold the CDC accountable?” he argued

Petitioner-in-person Dr Vinod Kulkarni submitted banning of hijab in schools and colleges has affected the mental health of Muslim girls, more so girls who wear the hijab while adding hijab is sported as a cultural practice and custom for 1400 years.