According to officials, children who died in the accident were below 12 years of age. 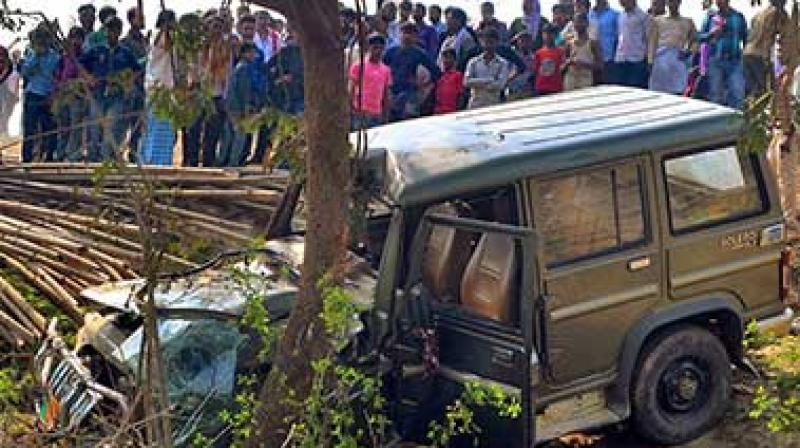 Nine children of a government middle school were crushed to death by a speeding SUV which belonged to district level BJP leader Manoj Baitha on Saturday. (Photo: PTI)

Patna: A manhunt has been launched to arrest BJP leader Manoj Baitha in connection with the accident which killed nine school children in Muzaffarpur.

Police officials said that FIR against the political leader was registered on the basis of a complaint by the grandfather of five children who had died in the incident.

“FIR has been registered against him and he will be arrested soon. All police stations have been alerted.” Bihar DGP PK Thakur told reporters in Patna on Monday.

Earlier eyewitnesses in a statement to the police had said that “the driver fled after his SUV overturned few meters away from the spot”. According to the police officials here, “mobile phone of the accused has also been found lying in the SUV”.

Nine children of a government middle school were crushed to death by a speeding SUV which belonged to district level BJP leader Manoj Baitha on Saturday.

The incident had triggered a violent protest by parents and other villagers who allegedly beat up teachers and vandalized Dharampur government Middle school’s building.

The incident had occurred on the National Highway number 77 which connects Muzaffarpur to rest of the North Bihar. The Dharampur Government Middle School is located along the national highway and many of its students belonged to families living in a village across the road.

According to officials, children who died in the accident were below 12 years of age.

Opposition RJD has been blaming the state government led by Chief Minister Nitish Kumar for “providing an escape route” to the accused by not arresting him.

“No action has been taken against BJP leader Manoj Baitha whom people saw driving the SUV at the time of the accident.  It seems that the state government is trying to protect him because he is a member of the BJP”, Leader of the opposition in the state assembly Tejaswi Yadav said while leading a march to Governor House in Patna on Monday.

The opposition parties are also likely to corner the government over the issue in the state assembly on Tuesday.

However, Deputy Chief Minister Sushil Kumar Modi denied accusations being made by the RJD and said that “there is no truth in allegations that the state government is trying to protect the accused. He will be arrested and sent to jail for the crime he has committed. We have taken the issue very seriously and the officials are trying to locate him”.