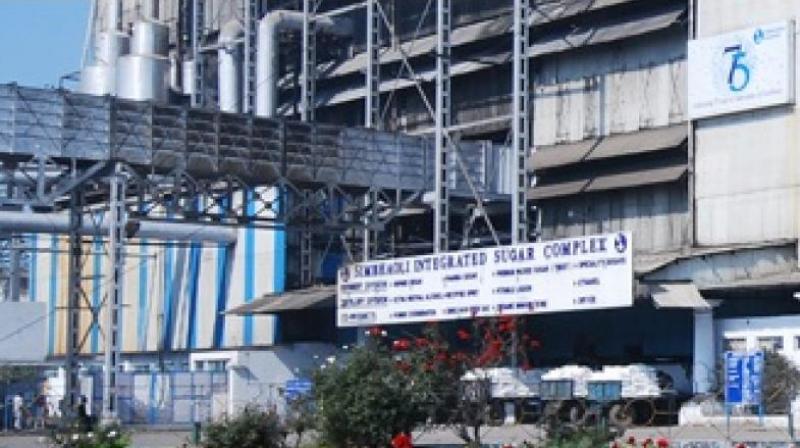 CBi has registered a case against top officials of Simbhaoli Sugars Limited, including its Deputy General Manager Gurpal Singh, who is the son-in-law of Punjab CM Captain Amarinder Singh, CMD, CFO, CEO and directors, and unknown bank officials. (Photo: www.simbhaolisugars.com)

Hapur: Punjab Chief Minister Amarinder Singh's son-in-law is among the 13 people who have been accused of causing a loss of Rs 109 crore to the Oriental Bank of Commerce, the Central Bureau of Investigation (CBI) said.

The investigating agency has registered a case against top officials of Simbhaoli Sugars Limited - a private sugar-manufacturing mill in Uttar Padesh's Simbhaoli - including its Deputy General Manager Gurpal Singh, who is the son-in-law of Punjab Chief Minister Captain Amarinder Singh, CMD, CFO, CEO and directors, and unknown bank officials.

Gurpal Singh, who is married to Captain Singh's daughter Jai Inder Kaur, is on the board of directors of eight companies in total.

The CBI has invoked sections dealing with criminal conspiracy, cheating and provisions of Prevention of Corruption Act against the accused.

The agency also carried out searches at eight premises, including the residences of directors, factory, corporate office and registered office of the company in Delhi, Hapur and Noida on Sunday, said CBI spokesperson Abhishek Dayal.

According to the FIR, the Oriental Bank of Commerce sanctioned a loan of Rs148.60 crore to Simbhaoli Sugars in 2011. “The loan was sanctioned for financing individual/ joint liability groups / self help groups / sugarcane farmers, as per a tie-up arrangement under an RBI scheme, to 5,762 sugarcane farmers supplying sugar produce to the said private company during the period from January 25, 2012 to March 13, 2012, which was dishonestly and fraudulently diverted by said company for its own needs,” said Dayal.

According to the FIR filed by the CBI, there are two loans, both from the Oriental Bank of Commerce, under probe - A Rs 97.85 crore loan which was declared fraud in 2015, and a corporate loan of Rs 110 crore used to repay the previous loan. The second loan was declared NPA (non-performing asset) on November 29, 2016, nearly three weeks after demonetisation of Rs 1,000 and Rs 500 notes was announced.

According to the FIR, while the bank declared a fraud of Rs 97.85 crore, the actual loss incurred was Rs 109.08 crore. In addition to the existing NPA, the bank sanctioned another corporate loan of Rs 110 crore to the company on January 28, 2015, to pay its outstanding loan of Rs 97.85 crore, and adjusted the total liability of Rs 112.94 crore towards the company by way of deposit of this new corporate loan.