India   All India  26 Feb 2017  Another note from 'Children Bank of India' recovered, this time from ICICI ATM
India, All India

Another note from 'Children Bank of India' recovered, this time from ICICI ATM

While the fake is identical to the original notes, it is guaranteed by "Children Government" and pays the bearer the worth of Rs 2000. 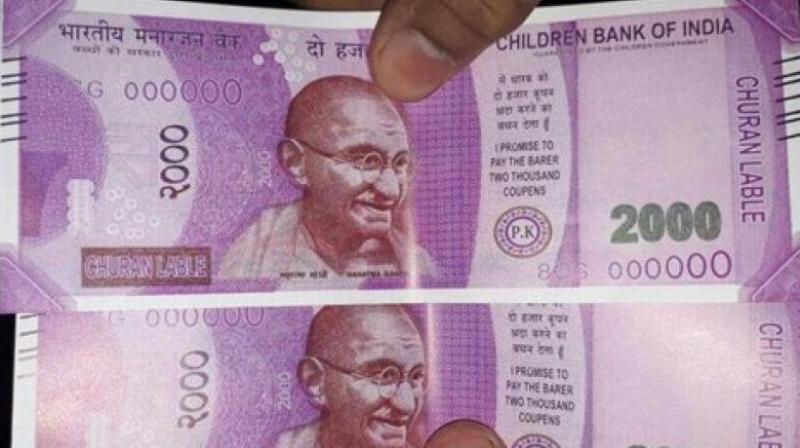 Rohtak: In yet another incident of counterfeit currency of Rs 2000 being found at an ATM, a note from 'Children Bank of India' was dispensed by an ICICI ATM in Rohtak.

Haryana police constable Raj Kumar, a resident of Kheri village lodged a complaint with the police that on February 26, when he withdrew Rs 6000 from an ATM at Kranti Chowk in Rohtak, one of the notes dispensed read 'Children Bank of India', 'Ek Kadam Swachhta ki Aur' and 'Bharatiya Manoranjan Bank'.

According to media reports, he said, this was the first time he used an ATM after the demonetisation and could only figure out that the notes were fake after careful inspection.

"I was forced to withdraw Rs 6,000 and one of the notes was fake," he said, saying that he only needed Rs 5,500, by the ATM did not have the requisite denominations.

While the fake is identical to the original currency notes, it is guaranteed by "Children Government" and pays the bearer the worth of Rs 2000.

The Assistant Sub-Inspector of Meham police station, Sunder Pal said he has received a formal complaint, but has not been able to speak to the bank officials, since it is closed on the weekend.

On February 22, a call centre executive in Delhi had withdrawn Rs 8000 from a State Bank of India ATM in Sangam Vihar, and received Rs 500 and Rs 2000 notes that read `Children Bank of India' in English and 'Bharatiya Manoranjan Bank' in Hindi.

The note also had the mention of "Churan Lable" (spelt accordingly), promised to pay the bearer the sum of "two thousand coupens" and was stamped by "PK" instead of the RBI.