PM Modi and President Bolsonaro agreed that the two countries could collaborate in the field of ethanol production. 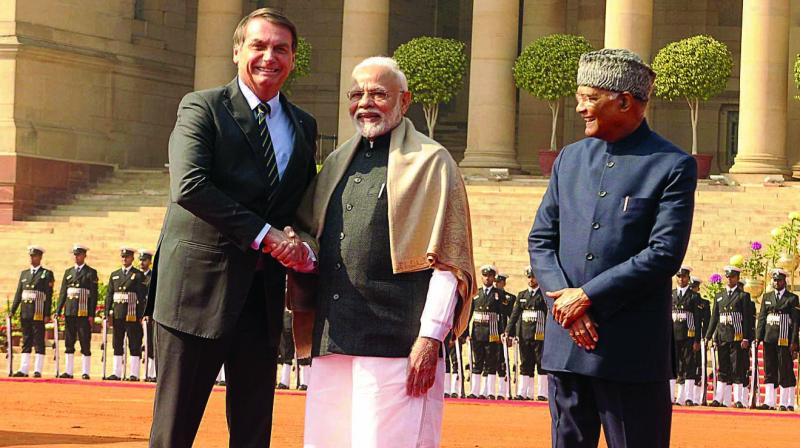 In a reference to cross-border terrorism which is being seen as a veiled reference to Pakistan without naming it, India and Brazil in a joint statement also “reaffirmed that international terrorism constitutes one of the most serious threats to peace and security and emphasised the need for... eradicating terrorism in all its forms and manifestations, including cross border terrorism.”

Both the countries also inked 15 pacts including in the fields of bioenergy, oil and natural gas, cyber-security, investment, health, traditional medicine, mineral resources, and animal husbandry and dairy production.

Sources told this newspaper that during the talks, when PM Modi raised the issue of Brazil approaching the World Trade Organisation (WTO) against the “support” (subsidies) given by the Indian government to its sugarcane farmers, “both sides agreed to address the issue through bilateral consultations”.

The two sides also “agreed to set a target of $15 billion in bilateral trade by 2022, given the complementarities between the two economies”.

PM Modi and President Bolsonaro agreed that the two countries could collaborate in the field of ethanol production. Given that Brazil is a leader in this field, it will share state of the art technology with India in this sector. The two leaders “recognised agriculture to be a key focus area for bilateral cooperation, important part of both economies.”

Welcoming Brazilian President Bolsonaro — who will also be the chief guest at India’s Republic Day parade on Sunday — PM Modi said ties between both countries were based on common values such as democracy, adding that both countries were “together” as part of various plurilateral fora like Brics and IBSA.

PM Modi also mentioned the “action plan” drawn up by the two countries that would strengthen the strategic ties. On his part, Brazilian President Bolsonaro spoke of the “great pride” he felt in visiting India and about the “record” number of pacts signed in New Delhi during his current visit. He added that he looked forward to being the Chief Guest at India’s Republic Day celebrations.

On the menace of terrorism, the joint statement said, “The leaders reaffirmed that international terrorism constitutes one of the most serious threats to peace and security and emphasised the need for concerted and coordinated action by the international community, with the ultimate objective of eradicating terrorism in all its forms and manifestations including cross border terrorism... The Prime Minister and the President of Brazil also reiterated the mutual interest to work closely in the Financial Action Task Force (FATF) in issues related to money laundering and financing of terrorism, State sponsored terrorism, etc. They called for early adoption of Comprehensive Convention on International Terrorism. They also called upon all countries to work towards rooting out terrorist safe heavens and infrastructure, disrupting terrorist networks and financing channels and halting cross border movement of terrorists. They underlined the need for all countries to ensure that their territory is not used to launch terrorist attacks on other countries.”

Given that both nations are claimants to permanent membership of the UN Security Council (UNSC) and have made joint efforts for reform of the UNSC, the Joint Statement said, “Both leaders reiterated mutual support for their countries’ aspiration to permanent membership in an expanded UNSC. They reaffirmed their commitment to the reform of the United Nations (UN), particularly the Security Council (UNSC), through its expansion in the permanent and non-permanent categories, with increased representation of developing countries in both, in order to improve its representativeness, effectiveness, efficiency and legitimacy, and for it to better meet the contemporary challenges faced by the international community.”

The action plan between the two nations seeks to “strengthen established institutional mechanisms and political consultations and promote coordination on bilateral, plurilateral and multilateral themes of mutual interest, based on the principles of equality and mutual trust”. The first thematic area of political and strategic coordination has “mechanisms” such as “foreign office consultations and strategic dialogue” while its goals include “promotion of frequent exchanges between the foreign affairs ministries of the two countries and to identify priority areas for bilateral cooperation and promote dialogue in these sectors”.

Another important thematic area pertains to “defence and security mechanisms” such as the joint defence committee; and a joint committee on cyber security. Goals include intensifying meetings of armed forces officers from both countries and to encourage greater collaboration between the respective defence industrial bases. Yet another is to “implement the memorandum of understanding on cooperation in the area of cyber security; and to work together with a view to conclude an agreement regarding cooperation in combating international terrorism and transnational organised crime”.