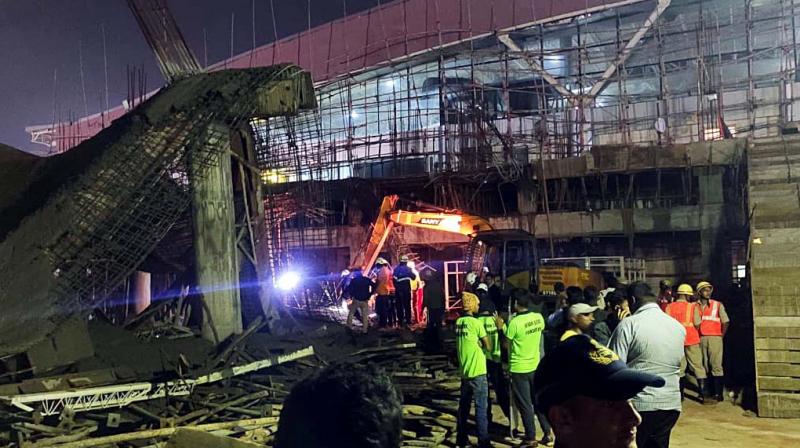 One person dead and one injured after the collapse of an under-construction roof of a link building connecting Terminal-1 and Terminal-2 of the Bhubaneswar Airport on Saturday. (Photo: ANI)

Bhubaneswar: In an unfortunate incident, the roof of an under-construction building at the Biju Patnaik International Airport collapsed late on Friday night, leaving one person dead and while critically injuring couple of other persons.

The under-construction building was being constructed to link the Terminal 1 with Terminal 2. The deceased was identified as Antaryami Guru, a helper of a truck engaged in the construction work at the airport. Though the worker was rescued and rushed to the hospital, he succumbed to the injuries.

Similarly, a couple of other workers were injured in the incident.

Four persons including managing director of the construction company have been arrested in the incident, they said.

As per the account of the injured workers, the construction was going on in the night and around 10-12 persons were engaged in work when the roof collapsed.

“There was one person who was trapped under the concrete and centering. We removed the wet concrete and rescued him and sent him to hospital,” said a Fire Services department official engaged in the rescue work. Around 10 other workers at the site also suffered minor injuries, a police officer said.

An ODRAF personnel engaged in the rescue operations said “We came prepared with all equipment. We used cutters to remove the steel and concrete, then we evacuated the victims.”

Sources said that the rescue operations continued for around three to hours and was called off after rescue of all the injured persons.

The project started last year during February. The cost of the two-storey terminal linking project is Rs 56 crore out of which Rs 3 crore work has been completed. “It all happened all of a sudden. I saw everybody jumping to save themselves. However, I got stuck under a staircase and was injured,” said one of the injured undergoing treatment at Capital Hospital here. Flight services remained unaffected.