Modi paid tributes to the martyrs at the Amar Jawan Jyoti before heading for the Republic Day parade. 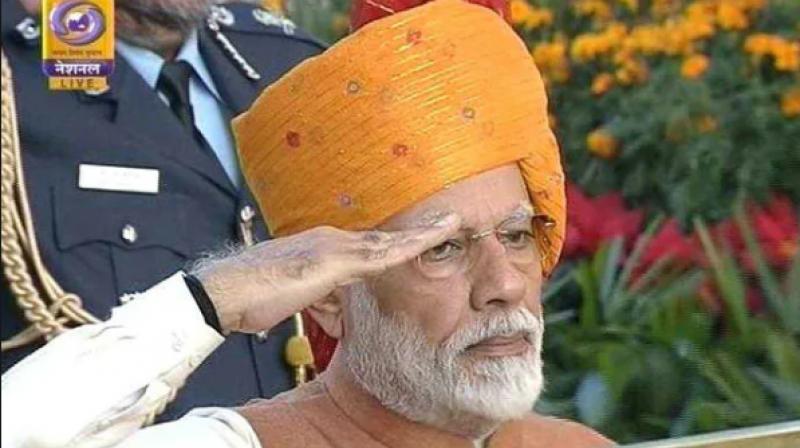 New Delhi: Prime Minister Narendra Modi continued with his tradition of donning colourful turbans at Republic Day celebrations on Saturday by sporting a yellowish orange headgear with a red tail.

Wearing his traditional kurta pajama and the trademark Nehru jacket, Modi paid tributes to the martyrs at the Amar Jawan Jyoti before heading for the Republic Day parade.

Turbans have been a highlight of the PM's sartorial choices at Independence Day and Republic Day events. For his maiden Independence Day address as the prime minister in 2014, Modi had opted for a Jodhpuri bandhej turban in bright red colour with green at the tail.

A yellow turban covered with criss-crossed lines in different shades of the same colour, along with a few in red and deep green, marked his 2015 look, and he chose a tie and dye turban in hues of pink and yellow for his appearance at the Red Fort in 2016.

The prime minister's turban for 2017 was a mix of bright red and yellow with criss-crossed golden lines all over it followed by a saffron turban last year. From bright red bandhni turban from Kutch to mustard Rajasthani 'safa', the prime minister has sported varied turbans at his Republic Day appearances too.