India   All India  26 Jan 2018  Opposition leaders meet in Mumbai for ‘Save Constitution’ rally
India, All India

Opposition leaders meet in Mumbai for ‘Save Constitution’ rally

The march is being seen as an attempt to consolidate anti-BJP forces ahead of the 2019 Lok Sabha polls. 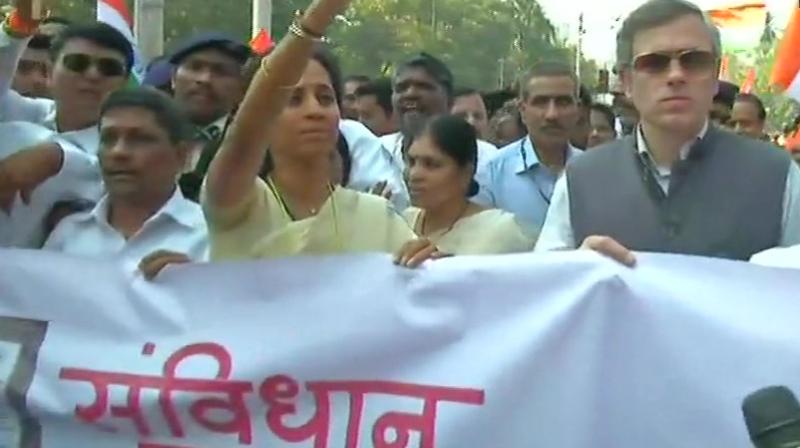 The meeting took place at the official residence of leader of opposition in Maharashtra Assembly Radhakrishna Vikhe Patil in south Mumbai.

Trinamool Congress has deputed Trivedi, a former railway minister, for the opposition march.

The 'Save Constitution' march is being seen as an attempt to consolidate anti-BJP forces ahead of the 2019 Lok Sabha elections.

The Maharashtra unit of the BJP too has organised 'Tiranga Yatra' in the city on Friday.

Independent MP from Maharashtra Raju Shetti, the convener of the 'Save Constitution' march, who was also present at the meeting, said participants will gather at Dr BR Ambedkars statue near Mumbai university and walk to Shivaji Maharaj’s statue at the Gateway of India.

"This will be a silent morcha (march). After reaching the Gateway (of India), they will stage a sit-in for some time.

There will be no speeches," he said. Maharashtra Congress chief Ashok Chavan and Mumbai Congress president Sanjay Nirupam will also take part in the march.

Tushar Gandhi, the great grandson of Mahatma Gandhi, is also expected to attend.

The BJP is organising 'Tiranga Yatra' in the city on Friday, apparently to counter the opposition event.

Chief Minister Devendra Fadnavis will address the gathering when it converges at Kamgar Maidan, he said.

The procession will start from Chaityabhumi, the memorial of B R Ambedkar in Dadar, before reaching Kamgar Maidan in central Mumbai.