The two sides also inked an MoU “on cooperation in the prevention and combating of human trafficking”. 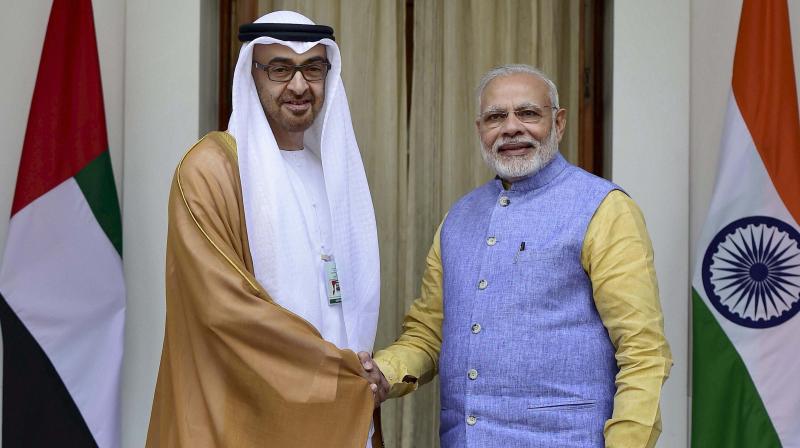 New Delhi: India and the UAE on Wednesday signed 14 pacts in key areas like defence, security, trade and energy, apart from a comprehensive strategic partnership agreement amid Prime Minister Narendra Modi declaring that cooperation stands poised for a “major takeoff”. However, the much-anticipated pact on the $75 billion investment fund, committed by the UAE, was not among the pacts signed after the talks between Mr Modi and Abu Dhabi’s Crown Prince Sheikh Mohammed bin Zayed Al Nahyan. But Indian government sources said the two sides were working on signing an agreement soon in this regard.

“I particularly welcome the UAE’s interest in investing in India’s infrastructure sector. We are working to connect institutional investors in the UAE with our National Investment and Infrastructure Fund,” Mr Modi said.

On the “Agreement on Comprehensive Strategic Partnership” between the two countries, the external affairs ministry said: “This is a general framework agreement that highlights the areas of bilateral cooperation identified under the comprehensive strategic partnership as agreed upon in the high-level joint statements issued in August 2015 and February 2016.”

On the MoU between India’s defence ministry and the UAE MoD on defence industry cooperation, the MEA said: “This MoU aims to establish cooperation in the identified fields of defence manufacturing and technology, including studies, research, development, innovation and cooperation between public and private sector institutions of the two countries. The two sides will cooperate in areas of armaments, defence industries, transfer of technology.”

Sheikh Al Nahyan, who arrived in New Delhi on Tuesday with a high-level delegation comprising ministers, senior officials and captains of industry, will be the chief guest at the Republic Day parade here on Thursday. Sheikh Al Nahyan also echoed Mr Modi’s views, saying: “As never before, our relationship has reached impressive heights... I look forward to seeing our relationship reach even more towering heights.”

Terming his discussions as “fruitful and productive”, Mr Modi, at a joint press event with the UAE leader, said: “We have shaped an ambitious roadmap of engagement to make our comprehensive strategic partnership purposeful and action oriented. The agreement that was exchanged just now institutionalised this understanding.”

“We exchanged views on developments in West Asia and the Gulf, where both countries have a shared interest in peace and stability. We also discussed developments in our region, including Afghanistan. Our shared concern on the growing threat from radicalism and terrorism to safety and security of our people is shaping our cooperation in this space,” Mr Modi said.

He added: “Moving forward, our cooperation stands poised for a major takeoff. I am confident, Your Highness, that your visit will build on the strong gains and understanding of our previous interactions. And shape its future framework marked by depth, drive and diversification of our partnership.”

However, the two sides did not sign a pact pertaining to the $75 billion investment as was hoped by MEA officials on Tuesday. Asked why the accord wasn’t inked, a senior official said: “Talks are in an advanced stage and this visit has helped identify sectors in which the investment can be made.”

Describing the bilateral energy partnership as an “important bridge”, Mr Modi said: “It contributes to our energy security. His Highness and I discussed ways to transform our energy ties in a strategic direction through specific projects and proposals.”

Observing that the UAE was home to around 2.6 million Indians, the PM said he expressed gratitude to the Crown Prince for looking after the welfare of Indian nationals in his country, and also thanked him for allotting land for a temple for the Indian diaspora in Abu Dhabi.