There is no question that he was the transformational leader when it came to Indian foreign policy, Jaishankar pointed out 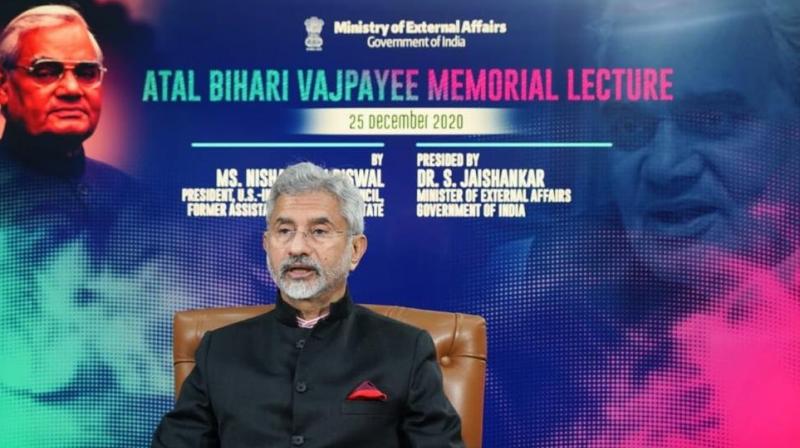 New Delhi: India's decision to carry out the Pokhran nuclear explosions in 1998 will remain then prime minister Atal Bihari Vajpayee’s “most enduring contribution”, External Affairs Minister (EAM) S. Jaishankar said on Friday, even as President of the US-India Business Council and former US State Department official Nisha Biswal said Mr. Vajpayee foresaw the “potential dangers posed by a rising and unchecked China”. In an indication of the almost certain increased focus on human rights and democratic values by the forthcoming Biden Presidency, she also said that the Indo-US strategic convergence “needs to be buttressed with a broader focus on our shared democratic values”.  Ms. Biswal was delivering the A.B. Vajpayee Memorial Lecture, an annual lecture series begun by the Ministry of External Affairs (MEA) on the occasion of the former PM's 96th birth anniversary.

Ms. Biswal, who previously served as US Assistant Secretary of State for South Asia during the Obama Administration, said in her Address, “Prime Minister Vajpayee was able to foresee what many others failed to see, he saw the potential dangers posed by a rising and unchecked China. And he saw the importance of a US-India partnership, built on the foundation of our democratic values, to advance a rules-based order that would enable a more peaceful, prosperous and pluralistic Asia.”

She further said, “The last several years have seen a more aggressive and assertive China that sought to leverage its growing economic clout to advance its strategic ambitions, often at the expense of its neighbors. The words of Prime Minister Vajpayee, some 20 years ago, foreshadowed the challenges that we are seeing play out across the Indo-Pacific. And in the face of these destabilising actions, the United States and India have forged a closer partnership and cooperation.”

Ms. Biswal added, “With the incoming Biden-Harris Administration, there will be a renewed focus on restoring our global alliances and strengthening our global institutions. And the advances of the past four years and the strategic convergence which we have seen deepened in the current administration will continue but they need to be buttressed with a broader focus on our shared democratic values.” In her Address, Ms. Biswal, significantly, did not mention India’s 1998 Pokhran nuclear explosions that had then led to imposition of sanctions by the US on India.

In his Opening Remarks on the occasion, EAM Jaishankar said, “On a whole range of national security and foreign policy issues, Atalji introduced corrections, some bold and others more nuanced. His 1998 exercise of the nuclear option will remain his most enduring contribution. If our Russia relationship remains steady to this day, this owes partly to his endeavours. Our principled approach of engaging China on the basis of mutual respect and mutual sensitivity also reflects his thinking.”

The EAM pointed out, “Looking back at Atalji’s life and legacy, there is no question that he was the transformational leader when it came to Indian foreign policy. He had an intuitive understanding that the post-Cold War world required India to drastically rework its relationships and interests. This vision led to a new beginning with the United States that has since been developed by successive Governments on both sides.”