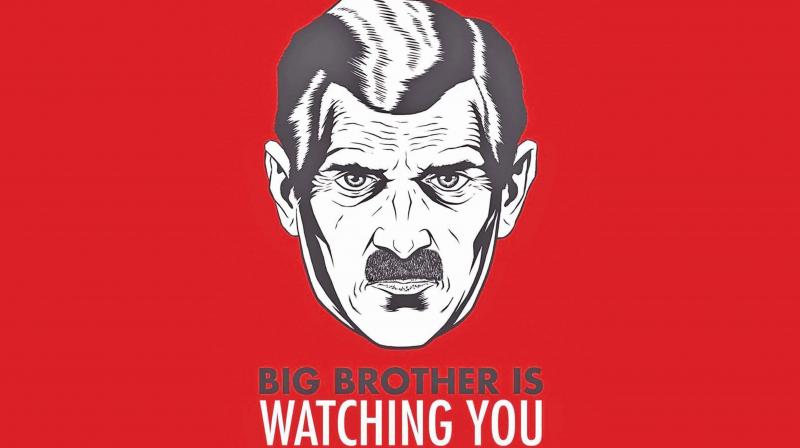 The powers that the executive sought, even in defiance of top court orders on the Aadhaar issue, were trimmed by a Constitution Bench.

Having spent the best part of his life in the UK for about five decades a friend said he was going back home — to Pakistan.

The ‘why’ poured out naturally enough considering how intriguing this decision was. The 75-year-old explained, “You walk out of home and there are thousand cameras capturing your every move. The roads are filled with them,” he said. Feeling uncomfortable with just the thought of being the subject of surveillance, Qamar Ahmed packed his bags and went to his roots in Karachi.

The surveillance cameras are probably the least inconveniences of modern life. Nobody who goes about his everyday life even notices them. They are a necessary evil in these complex times in which we don’t know where the next source of danger is lurking. If cameras could pose such psychological discomfort to a person, imagine our plight now. The Indian government has just given a licence not just to the 00 Section with the licence to kill as in the movies, but every third-grade bureaucrat is empowered so much as to open your emails, snoop on your cellphone conversations and read the messages.

What sort of society are we building that allows every snooping government agency to classify everyone as a terror threat, an arms dealer, master criminal, drug peddler, tax dodger or a danger to national security? About 99.9 per cent of the population has no grandiose scheme to destroy the world like Blofeld, the villain in the Bond movies. (By the way did you know that Ian Fleming named his fictional villain after his wartime friend Blofeld whose son Henry is the famous cricket raconteur on Test Match Special with a fancy for those women’s earrings?)

How could a devious scheme such as this be drawn up by which a civil servant could open up your mails and your phone? As a palliative to the criticism faced, the government even made a concession in Parliament saying the Union Home Secretary would have to give clearance for snooping. What? Another bureaucrat would okay executive action to snoop on a citizen? Would this even pass the most basic judicial scrutiny?

What they have done is to try and dismantle the structure by which a judicial officer independent of the executive would have to give the clearance to act within three days of an application. But here they seek a nod for the sake of writing it up formally in their books permission from another branch of the executive to back an executive action.

And the moment they have opened up someone’s mail, they have gathered data on him of a lifetime.

This is nothing but a Goebbellsian twist to the regime’s power to sanction action against any one of 130 crore citizens of this country. 1984? This goes way beyond all that. This is the reality of an insecure government seeking blanket action against anyone in the land. This makes India appear more like a totalitarian regime or tinpot dictatorship that assumes all kinds of powers over the citizens.

All countries take action by way of intelligence to track and tackle the evil designs of the few malcontents who have mayhem on their minds, usually starting with getting their hands on explosives.

But no one seeks or advertises this right to snoop on every citizen’s private email. And then we have a very senior minister trying to pass this off just another UPA initiative of nearly 10 years ago.

The only consolation is the debate on the issue has heated up so much that judicial review will be sought by public spirited citizens in PILs as well as by forums that are deeply concerned over a runaway government machinery that seeks to arrogate to itself all the powers it could possibly sweep up.

It is up to the Supreme Court once again to tell the executive what it can and cannot do, much as it did in the Aadhaar cause celbere in which the right to privacy of citizens was upheld.

The powers that the executive sought, even in defiance of top court orders on the Aadhaar issue, were trimmed by a Constitution Bench.

Unless the court shows the way in the matter of personal surveillance, the executive will simply empower itself in every which way it can so as to hold sway over people’s lives. Already we know that the entire government machinery runs on money taken from people in one of the highest directly and indirectly taxed countries in the world.

What we are up against is a Frankenstein of a government machinery on a feeding frenzy looking for more power over citizens. Time is ripe for the Supreme Court to take this up as an affront to every citizen of this country.

R. Mohan is the resident editor of the Chennai and Tamil Nadu editions of Deccan Chronicle