India   All India  25 Dec 2018  Can psychotropic drugs be home-brewed?
India, All India

Can psychotropic drugs be home-brewed?

Yeast or bacteria, on the other hand, are advantageous too as they are easy to conceal, grow and transport. 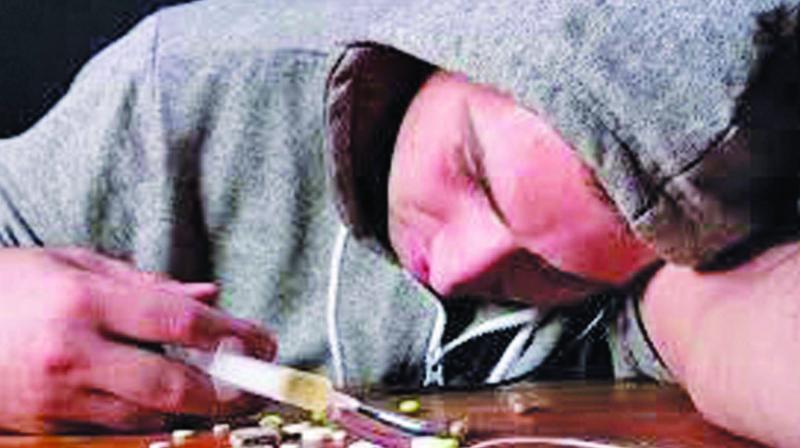 It is now technically feasible for anyone to concoct illegal drugs from the comfort of one’s home with a little access to yeast cells and some knowledge of fermentation.

Fifteen cronies who have known each other since school have bunched-up for a party at a beach house off the ECR road, Bala their favourite Psychonaut host, plucks at a bag of heroin, and sets forth, to cut it into lines at the table. He snorts a line of heroin and another of MDMA.

Other cronies string along with the ritual, take turns to snort and sniff the lines, getting their minds blown away to ecstatic existential realms. Simultaneously, joints get lit and passed around, while the red wine which is being sipped .moistens the throats parched by the weed.

In a jiffy, they are all as high as kites feeling floaty and nice. Life seems so freaking amazing that nothing seems to matter. They twirl around in the room, hold hands,  sense unperceived compassion for another, laugh, marvel and feel goddamn lucky to be such wonderful friends.

Ten hours later, zonked out and exhausted from dancing, little by little the declining high seems to gradually give way to a grotesque melancholy - an inevitable crash stares at them, they can clearly sense the comedown, an achy, twitching sadness. Nothing now seems more urgent in this world than to claw one’s way back to regain that familiar euphoric high and to clasp and cling to it like an obsessed lover.

Bala reaches out for his homebrew fermenter where the yeast cells cloned with the opium genes have been busy since several hours converting the sugar in the culture to morphine. Much of the morphine so produced has undergone acetylation to heroin, and the fermenter at the press of a button is ready to belch out the home-brewed heroin. Bala presses the button, the ritual gets repeated, the dragon gets chased all over again.

The scenario painted in the preceding stanza is not a figment of my imagination, John Dueber and his colleagues at University of California in Berkeley in 2015 succeeded in producing a genetically modified yeast which can feed on glucose and produce morphine from which heroin can be derived.

Their findings, published in Nature Chemical Biology, has opened the doors for yeast-derived “home-brewed” cheap and easy illegal drugs. The concept of using microscopic organisms to make drugs is not new. Insulin for people with diabetes and several pharma drugs and chemicals are under production through genetically modified E.coli and other microbe cells for decades now.

Like Bala, it would, therefore, be possible to produce coke or heroin on demand in our kitchen or garage. With synthetic biology we wouldn’t need crops to grow drugs, we would be able to produce them in the labs or our homes.

There are now several commercial companies that provide DNA synthesis services, so the process can be easily outsourced: a customer can place an order for a DNA sequence on the net and synthesise a complete microorganism - using only published DNA sequence information and mail-ordered nucleotides.

Once we have the DNA sequence of a gene or group of genes for a particular drug, we will be able to synthesise the gene and clone it into microbes such as yeast, E.coli, etc. The bacteria with the cloned genes would express cocaine, heroin, morphine, pot, LSD etc.

As the cost of synthesising DNA has drastically declined over the last 20 years and is now around $US0.3 per base pair, it’s now well within reach of each and everyone.

There are several advantages for drug lords to produce drugs from genetically modified microbes. Firstly, there won’t be any need for cultivating thousands of acres of land to grow cocaine, LSD or pot. There would be no fear of being detected by surveillance aircraft, no fear of drug-sniffing dogs or destruction of the crop by drug enforcement agencies.

There also won’t be any need to smuggle coke or heroin across borders. Lastly, the traditional methods are unreliable as well as time-consuming, as the plants can be damaged by bad weather, pests and disease.

Yeast or bacteria, on the other hand, are advantageous too as they are easy to conceal, grow and transport. Law-enforcement agencies would find it massively difficult to control the distribution and spread of an opiate-producing yeast strain. Albeit, the only drawback is that its productiveness would need to be increased a few hundred times before it becomes a popular way.

It is now technically feasible for anyone to concoct illegal drugs from the comfort of one’s home with a little access to yeast cells and some knowledge of fermentation. All said and done, decentralised and localised production would almost certainly reduce the cost and increase the availability of illegal opiates - substantially worsening a worldwide problem. Globally, more than 16 million people use opiates illegally.

Analogously, in 2015, research workers at the Technical University of Dortmund released a study detailing their successes in genetically modifying a yeast cell to crank out the main active compound in ganja (Cannabis) called THC, which has been a fantasy of stoners for more than a decade.

Cannabinoids like THC are utilised in pain remedy, but present-day methods of cultivating marijuana and extracting the active compounds not only cost a pretty penny but is also toilsome rendering minuscule yields. Studies are in the pipeline at other institutes to see how fast-growing Streptomyces bacteria strains can be exploited for producing cannabinoids, insinuating a potential new method of generating the compound without cultivating marijuana.

Similarly, by deploying synthetic biology researchers at Stanford are making genetically altered yeast to scoop out a non-narcotic cough suppressant known as noscapine, which is sourced naturally from opium poppies.

Lysergic acid diethylamide (LSD), also known as acid, is a hallucinatory drug. LSD was first made by Albert Hofmann in 1938 from  lysergic acid, from a fungus called ergot. The ergot fungi called Claviceps purpurea produces fruiting bodies which are the source of the lysergic acid.

The contemporary industrial method of lysergic acid production, in which decaying matter fuels fermentations of Claviceps is cumbersome with extremely low yields. Pharma firms, as a result, are unable to produce over and above 40,000 pounds of it every year.

But today we can pin our faith on efficient production after Matuschek et al in 2010 triumphed using an E.coli-cloned Claviceps enzyme and enzyme-free glutathione to convert the intermediate into agroclavine in vitro. Similarly, Edwin Wintermute and Pam Silver at Harvard’s Department of Systems Biology are on the point of sneaking that crucial segment of Claviceps genome into baker’s yeast to get it to produce LSD.

One of the greatest success stories of synthetic biology has been the synthesis of artemisinin an antimalarial drug. It was discovered in 1972 by Youyou Tu, a Chinese scientist, who was awarded half of the 2015 Nobel Prize in Medicine for her finding. Artemisinin isolated from the plant Artemisia annua, or sweet wormwood, is a herb employed in Chinese conventional medicine.

Its production was scanty and erratic owing to the whimsicalities of growing sweet wormwood. Its mass production became a possibility mainly due to the efforts of Jay Keasling and colleagues at the University of California, Berkeley, who transferred the artemisinin genes into a yeast cell. Prior to this, artemisinin production was tortoise-like because it took about a year for the crop of sweet wormwood to grow.

For instance, if a contractor in Africa placed an order for it took about 18 months to get the drug.” An engineered strain of yeast can now produce the drug on demand and is “head and shoulders above the plant” at making it, says Jack Newman, co-founder and senior adviser at Amyris, a microbial engineering company.

At long last, I believe, that attraction of man to drugs is mostly spiritual. It stems from man’s dissatisfaction with his mundane existence. The worldly existence of man is full of sorrow and suffering. There is no ecstasy, there is no real joy. It’s man’s search for meaning and spiritual bliss which sometimes leads him to drugs and hallucinogens.

Man does not know that the aching void inside of him is because of spiritual emptiness. What he is actually searching for is a deep spiritual connection, not drugs. He is unaware that the connection he is yearning for is possible from prayer, meditation and other spiritual practices.

It’s not possible to explain meditation to such a person through words, it has to be experienced, but drugs to a certain extent help a person get a hallucinatory experience of meditation. Drugs are also capable of helping a person gain insight into themselves, their lives, and the nature of the universe, which may eventually help a person, know the taste and feel of spiritual life.